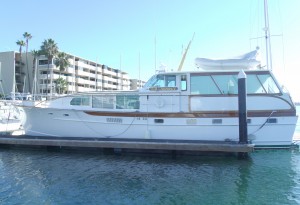 Over the years there have been several Trumpy motor yachts berthed in Newport Harbor. There are several issues that make these wooden yachts noteworthy.

John Trumpy, Sr. started his yacht building business in Florida around 1923. Sometime around 1925, the 104-foot Trumpy motor yacht “U.S.S. Sequoia” was launched with a different name, but within a few years it was named the above.

For many decades the beautifully varnished mahogany superstructure with gloss white painted hull was the presidential yacht. There are an abundance of photos with the Roosevelts, Eisenhowers, and Kennedys enjoying voyages along the Potomac with kings, queens, dignitaries, families and friends. Churchill’s only comment was that the varnished teak lounge chairs on the aft deck were uncomfortable.

I wish I had known the 81-ton yacht was still berthed outside Washington D.C. on the Potomac when we were there visiting our son and his family while awaiting the birth of our 3rd grandchild. We did visit the National Marina where among 100 or so yachts we saw several 20-foot Duffy electric launches for rent. In an early November column I mentioned this with a photo of them registered out of Alexandria, Virginia.

The “U.S.S. Sequoia” was sold off by President Carter as an unnecessary expense of the office. Since that time it has been restored and is available as a noteworthy charter yacht.

I remember I read following the 9/11 catastrophe that Fox News analyst Greta Van Susteren and her attorney husband lived on their 80-foot Trumpy due to turmoil in Manhattan. Her husband grew up boating and kept their yacht in Baltimore. They had their captain power up to New York Harbor and hunkered down on the yacht for several months following the terrorist attack. Her husband was raised around wood boats and as their careers as attorneys progressed he found the Trumpy and set about the restoration process. Living aboard minimized the transportation disruption caused by the 9/11 attack and when not working allowed short cruises to escape the carnage.

All of these thoughts came to mind when I cruised by the O.C.C. Marine Center and saw “Aurora V.” I often acknowledged the beauty and superb condition of “Aurora V” at its berth off Bayside Drive, near the Balboa Island Bridge. This 58-foot Trumpy will be berthed at O.C.C. due to the yacht being donated to Coast and is for sale through Fraser Yachts in San Diego.

The New York Times mentioned some time ago the Trumpys are the Rolls Royce of American motor yachts. All Trumpys were wooden with superb craftsmanship. This is a truly “gentlemen’s yacht,” and in my opinion wooden yachts ride smoother than fiberglass or metal yachts.

She was built in 1969 and went through a major refit in 1997. She has three staterooms, two heads with showers, a salon and dinette. Aft of the pilothouse is an additional seating and viewing area. There’s lots of varnished mahogany in the interior with gloss white accents. This yacht is for sale at a fraction of the replacement cost. The next owner will obtain a very special yacht in excellent condition with the Cape or Alaska within easy and comfortable access.

I was sad to see the end of an era as C-Fab Stainless Metal Works is closing its doors. Steve, the owner, helped me obtain the phone number of a Caterpillar Diesel engine mechanic I needed for a Tiara Sportfisher in Redondo Harbor I maintain. With a large part due to the recession, some large accounts receivables and some disgruntled employees filing disability suits, the 29 years of C-Fab has disbanded. Steve says he will keep working but by himself and through a different entity.

Summer weather is back and I’ll see you around the harbor. Enjoy!

Steve Barrett has more than 50 years boating in Newport and performs systems checks, repairs and pilots yachts. Email him at [email protected].