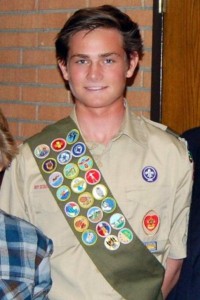 Earning the coveted Eagle Scout badge is not for the faint of heart–just ask Newport Beach resident Jack Clement.

Jack is one of more than 738 Eagle Scouts honored in 2012 by the Orange County Boy Scouts of America.

Typically, an average of 650 Eagle Scout awards are earned each year; this year’s numbers revealed an 11 percent increase from 2011. The Eagle Scout award is the highest honor in Boy Scouting and has been awarded to young men nationwide for more than 100 years.  More than 2 million young men have earned the rank of Eagle Scout since it was first awarded in 1912.

Jack joined the Boy Scouts when he was in first grade as a Cub Scout. “All my friends from school were doing it, so I joined with support from my dad who was an Eagle Scout,” he told me.

“My favorite thing was all the places I got to visit and camp at during my Eagle Scout career,” says Jack.  I loved the way he referred to it as a “career.” He told me the most challenging aspect was the time commitment necessary to earn all the badges and meet all the requirements to become an Eagle Scout.

Requirements to earn an Eagle Scout badge include being a Boy Scout or Varsity Scout who has been a Life Scout for more than six months. Candidates must demonstrate leadership qualities through the completion of a meaningful service project. These communities’ projects should service the needs of any religious institution, school, or local community. The average number of hours spent on an Eagle Scout project is 130. No small feat to be sure.

If you add the numbers, in 2012, Eagle Scout service projects alone in Orange County represented approximately 95,940 hours of community service for Jack’s class of 2012.

Jeff Herman, president and scout executive for the Orange County Council, Boy Scouts of America (OCBSA) say that he is thrilled with the number of honorees. “These young men have committed themselves to reaching a level of Scouting that is reserved for only the most dedicated and ambitious individuals. This shows a great investment by the scouts and their families to learning the roles of leadership life skills and discipline.”

“These accomplishments are a clear sign of a move in the right direction for our local youth,” said Herrmann. “With the competition surrounding advancement into the adult world, our community needs to prepare our young men with the tools and values they need to excel. I believe the increasingly high number of Eagle Scouts proves that our children are rising to the challenge.”

The Scout Oath is: “On my honor, I will do my best to do my duty to God and my Country and to obey the Scout Law; To help other people at all times; To keep myself physically strong, mentally awake and morally straight.”  The Scout Law is defined thus –  “A Scout is: Trustworthy, Loyal, Helpful, Friendly, Courteous, Kind, Obedient, Cheerful, Thrifty, Brave, Clean and Reverent.”

When I asked him what he would tell a young person about Scouts, Jack replied, “Join and stick with it, it feels good to say I’m an Eagle Scout and it’s an even better thing to put on my resume.”

Columnist Lynn Selich is the founder and editor-in-chief of OCSocialScene.com. Reach her at [email protected].