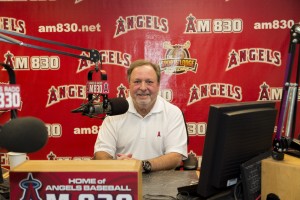 Here’s a question that even a first year medical student might not be able to answer: What organ of the body gets stronger the more you use it?

The answer is bone, according to Orthopedic Surgeon Dr. Alan Beyer, Executive Medical Director of the Hoag Orthopedic Institute in Newport Beach, and most recently creator of and on-air host of the “Doctor in the Dugout” show on Angels Radio (AM 830) heard every Saturday at noon.

Beyer knows bones, as well as muscles, tendons and ligaments, having earned his MD from Georgetown University in 1976.

Following his internship at Long Island Jewish Hospital, Beyer spent four years in residency at the Hospital for Joint Diseases in New York before winging to Southern California in 1981 for a prestigious fellowship at the world-famous Kerlan-Jobe Orthopedic Clinic in Los Angeles.

One year later, Beyer hung his shingle in Orange County, along with hard-earned certificates from all the important medical affiliations, ready to fix the fractures of young and old alike.

Blessed with an academic intellect, but admittedly not a body teeming with the genes of an athlete, Beyer nevertheless always loved sports—loved to try them, loved to watch them. His favorite is golf, both playing and watching.

It was while at Kerlan-Jobe that Beyer truly learned to appreciate the physical perfection of world-class athletes, how they developed their bodies so specifically, and how these athletes learned about the anatomy of their sports.

Beyer studied slow motion videos of athletes in action to learn how bodies perform at such dynamic levels. He cited baseball pitchers as achieving an amazing plateau of delivery,

able to catapult the baseball at or near 100 mph, while placing the ball consistently within a small target zone.

On the receiving end, Beyer stresses the phenomenal perception of the batter to catch sight of the ball before it leaves a pitcher’s hand, intellectually slow down its 60-foot-long flight, and then hit this 2.9-inch orb with a round stick whose striking surface is the size of a nail head.

Imagine throwing a nail into the air, then hitting its head solidly with a small ball-peen hammer before the nail succumbs to gravity.

And that’s why there are so few professional baseball players, and even fewer pitchers.

“I wish I could have done all that myself so that I could fully appreciate what they do,” he reflected. “People just don’t realize what Olympic and world-class athletes put into their game.”

Beyer has treated athletes from just about every sport. One would be hard pressed to guess which among the elite athletes of the world the doctor considers “the” supreme athletes among those elites: jockeys.

“These little guys who weigh maybe 110 pounds, guide 1,500-pound horses just with their legs,” only using their hands to whip them in the hopes of extracting that extra inch of speed as they near the finish line; and most jockeys ride seven to eight steeds a day.

Over the decades of practice, he has unofficially kept a sports score (of sorts) that is seldom recognized: What is one of the most dangerous sports played today? The common answers are football, MMA, boxing, motor racing, javelin catching…

But the correct answer is actually girls’ cheerleading. This has become a daring circus act, where teams of girls throw the most gymnastic among them high into the air, where flips and spins wow the crowds.

Unfortunately, the girls have proved better at tossing than catching. Those tossed abruptly learn that earth doesn’t offer the rebounding elasticity of a trampoline bed.

In the sports world, common question incluode “How much further can performance improve?” How much faster, stronger, quicker, higher? What are the human limits?   “It’s a complicated equation,” Beyer observed. “Part of it is philosophic; are we pushing too hard? Are we pushing kids to injury?”

Part of the motivation, of course, is money; it’s always part of the equation, Beyer opined.

“At least once a month, a parent comes to me and asks, ‘Doc, isn’t there something you can give him to get bigger or faster.’”

At that point, Beyer euphemistically tells the parent to take his kid and take a walk.   This doesn’t just happen in the more affluent communities; it’s nationwide and crosses socio-economic boundaries, Beyer informed.

“Don’t let the kid try to exceed what God put in him,” Beyer advised. As for the common folk, an active lifestyle is important, as is keeping things in balance through movement and diet. “Our grandparents were right, do everything in moderation.”

Benjamin Franklin said, “If you want something done, ask a busy person.”

Inarguably, Dr. Beyer might very well have been the model for Ben’s counsel. He’s either seeing patients or in the operating room up to 50 hours a week. Beyond that, he attends management meetings and oversees department administration at least 12 hours weekly.

Where most would flop on the couch to recoup, Beyer can be found at his computer for another five to six hours blueprinting the script for his weekly radio show, “Doctor in the Dugout.”

“Just like doing surgery, hosting a radio show gets easier and better,” he compared.   He was careful not to include golf in that analogy.

For the past six years, both print and electronic media have come to Beyer for his sports medicine comments.

The Newport Orthopedic marketing department was looking to brand their services in the community and thought a radio show might be a viable avenue. Thus the naturally garrulous and outgoing Beyer became the obvious choice. He admits to being somewhat of a ham anyway, so the marriage was made.

“Doctor in the Dugout” is now one and one-half years young.

Beyer’s roster of in-studio guest-physicians practices every medical specialty that might be of interest to sports enthusiasts. He leaves at least two segments for answering call-ins and E-mails.

At age 64, as evidenced by his enervating schedule, Dr. Alan Beyer is an endurance athlete in his own right — one who has written his own prescription for a full, rewarding and sharing life.