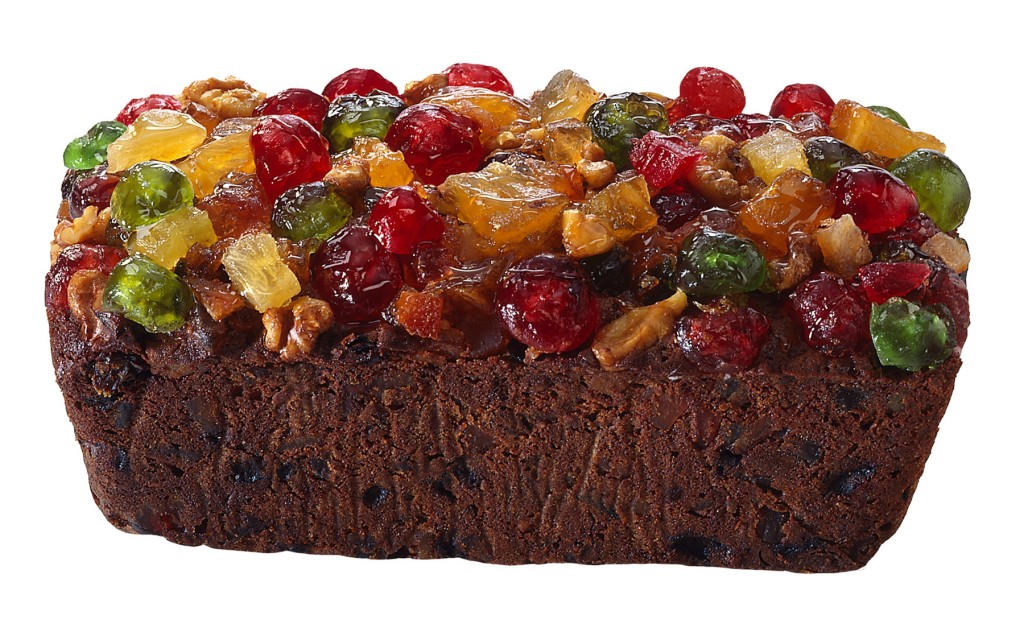 The official month of the fruitcake is here, and fruitcake aficionados must be dancing a jig right now.

I realize there are many fans of this ubiquitous holiday confectionary and I certainly do not want to rain on their parade, but let’s get real. The weighty bricks that are typical of most fruitcake truly give my healthy attitude a shake, rattle and certainly a roll of the eyes.

Maybe some fiber aside, the main purpose for the fruitcake is to withstand days, months, or even years in the cupboard, awaiting the right moment to burst forth and finally be served to second rate relatives or shamelessly re-gifted to an unsuspecting coworker.

It confounds the senses that this cake has persisted since the days of ancient Rome, where the common ingredient, pomegranate seeds, camouflaged its true purpose. My instinct tells me these slabs of cooked dough were probably used as a secret weapon by the gladiators as they fought for their lives in the arena, fruitcake ready in hand to take out the next opponent.

But it took the Middle Ages to boldly bring forth Crusaders and hunters to grasp the true use where they loaded their packs down with fruitcake to sustain themselves over long periods of time away from home. Smart on the part of the Crusaders, since the endless slaughter lasted well over 200 hundred years. Filled up in pine nuts and raisins mixed into a barley mash consisting of honey, spices and preserved fruits with the entire baked good saturated in alcohol provided a full belly and inebriated glory all in one big bite for these driven men.

It wasn’t until the 1800’s when some political movement banned the then called “plum cakes” and they became outlawed entirely throughout Continental Europe due to their “sinfully rich” taste. My guess is some Earl or Duke was clubbed to death by the cake, a treacherous act by some down-trodden urchin. But soon laws were once again enacted, with restrictions of course, to allow the fruitcake its revival.

Queen Victoria is said to have waited a year to eat the cake she had received for her birthday because she felt it showed restraint, moderation and good taste; or maybe it simply took that long to work up the gusto to taste it.

And how for heaven’s sake did someone conjure up the custom for unmarried wedding guests to put a slice of the cake under their pillow at night so they can dream of the person they will marry. I suppose just another creative way to dispense of the leftovers.

So what really makes up the modern fruitcake? Every country has its own variety. Those who prefer to eat their alcohol can try the version made in the Bahamas where everything is drenched in rum, from the candied fruit, walnuts and raisins that are soaked for 2-3 weeks in the darkest rum before stirring into the batter to the finished cake where rum is generously poured on it while it is still hot.

Back in the States the typical American fruitcakes are blatantly stuffed with candied fruit that once upon a time had contained some form and structure. And of course the traditional loads of pecans, walnuts and sometimes almonds give the cake its redeeming nutritional value and had invariably prompted the phrase “nutty as a fruitcake” during the mid 1930’s (a time where Bonnie and Clyde no doubt had their own stolen fruitcake stash).

Alas, most of our fruitcakes are sans alcohol these days, but some traditional recipes are still saturated with liqueurs or brandy and covered in powdered sugar, which originally served the purpose to prevent mold and thus gave this nutty cake a secured indestructible existence.

And so I can almost wonder, with the price of coal forever rising, naughty people becoming naughtier and Mrs. Claus’s propensity for baking, if someone somewhere has woken up to find a fruitcake stuffed in their stocking instead.