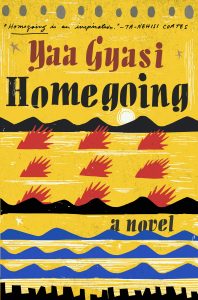 As a parent, September is always about new beginnings.

A new school year brings with it a new class, a clean slate, and possibly a transition into a new phase of life – for both the children and ourselves.

Sometimes met with joy, sometimes with anxiety, and often a strange mix of both, these moments of change often determine the direction our lives will unfold.

We seem to define ourselves by the groups we are surrounded by, and so, our lives move forward, shaped largely by the way society sees us, as soccer moms, stage parents, or empty-nesters.

Mostly, although they are not always accurate, these are roles we have chosen for ourselves. So, as I consider the book club selection for September, I can’t help but wonder at the desperation of a transition that was not only entirely unwanted, but brought with it the specter of a life completely unknown, in a place that would be utterly foreign, yet on whose shores a course would be laid for generations to come.

Yaa Gyasi examines just such a moment in this month’s selection, “Homegoing.” A striking debut from a clearly skilled author,

the book follows two half-sisters and their progeny across seven generations and 300 years, as we see how the legacy of slavery unfolds and colors their very divergent paths.

The book begins in Ghana, with a fire, set by the girls’ mother Maame, to escape her master. As his village burns, Maame leaves behind the infant daughter she bore him, Effia, to return to her own village, her husband, and their daughter, Esi.

The girls grow, and Effia will find herself married off to a British Lord, living in Ghana to oversee the slave trade. While hers is a life of relative comfort, she is but a step above a slave herself, stuck in a life not of her choosing.

As warring tribes capture and sell off each other’s people to the traders, Esi is sold into slavery. For a time, they are captives in the same castle, Effia, her husband’s “prisoner” on the upper floors, and Esi, in the dungeons, held with those to be sent across the ocean to American plantations.

One sister’s family tree will sprout in Africa, amid British colonization, the burgeoning slave-trade, and centuries of warfare between rival tribes. The other’s will take root in the colonies, and will grow though slavery, the Civil War, Harlem’s jazz scene, coal mines, and modern-day urban America.

Both branches will show how the blight of slavery irreversibly changed the paths of each country, and how its roots seeped into every aspect of life, forever changing the perception of, as well as the paths open to, those most deeply affected by it.

At just 320 pages, “Homegoing” takes readers through the ensuing three centuries at a fast but profound pace. While many of the characters stories are but vignettes, they weave together into a tapestry that tells a story the author felt needed to be shared.

Herself born in Ghana, and raised in Alabama, Gyasi’s path mirrored those of so many Africans before her, though under vastly different circumstances. Still, until researching this book, there was so much she didn’t know about her own birth country’s history.

When in school, we learn more about the American side of the slave trade, but not so much about how things unfolded in Africa. When in Ghana visiting the Cape Coast Castle (the last stop for many before boarding the slave ships) there was much she learned for the first time – about things such as Ghanaian complicity in the slave trade, and British soldiers marrying local women.

She felt that this information should be more readily available, and “Homegoing” was her labor of love in bringing it to us. Of the wide acclaim the book is receiving, Gyasi has said, “I think a part of it is really just about how people were kind of hungry for this story…about what kind of connects Africans and African Americans together.”