We can learn a lot from people and their stories, so let me share a story my friend Sharon Davis wrote. Her wisdom speaks to me, and you will see why as she shares her personal journey:

“I have known this woman for three years, playing blackjack at the assisted living home where I volunteer every week. We never talked personally until one day I learned she was raised in an interment camp for Japanese Americans in California during WWII. We had something in common. I was born in a Japanese interment camp for all enemy civilians in Manila. We were both labeled an enemy of the country were we lived.

So many stories have been written about military war prisoners but not many have touched on the subject of the citizens captured during WWII in Asia and the South Pacific by the Japanese. They were victims of circumstances—wrong place, wrong time. Countless Americans went abroad to find work during the depression. Many established successful businesses in other countries, as did my father. He moved to Manila to work for an import and export company, where he met and married my mother. They lived a privileged life during the colonial period of the Philippines, which at that time was a territory of the United States.

On December 8, 1941, the Japanese invaded the Philippine Islands. General MacArthur withdrew the US forces and left the Philippines with no defense. All who were of Allied citizenship were rounded up and taken to prison camps throughout the islands. My family were told to pack for three days and they would be released after registering with the Japanese military. 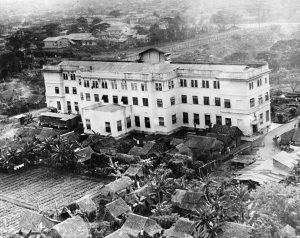 They were interned for over three years in the Santo Tomas Interment Camp in Manila, which was formally the University of Manila. My younger brother and I were born in the camp. I was eight weeks old when we were liberated in February 1945.

My parents never wanted to talk about their experience in the camp, and us kids did not push for information. I wish we had pressed our parents to share some of their stories. We have obtained bits and pieces over the years but I have learned the most through joining an organization name BACEPOW ten years ago. Each year the ex-prisoners have a reunion in Sacramento of all the surviving prisoners and descendants. Many survivors and historians have written books that have given me insights of life during that period of history. This is what I have learned:

Life was lived one day at a time. The 4,000 plus prisoner formed their own government structure, similar to our local government. It quickly became a mini city ruled by an executive counsel. A hospital was established by people with  medical backgrounds. The biggest threat to the prisoners, beside the Japanese military, was sanitation. Disease control was paramount. The university buildings were the living quarters. Men, women and children were separated. Younger children stay with their mother. Teams to cook, clean, wash and teach were formed. Everyone was on a level playing field, no one better than the other. They were all prisoners. Prison life became a new normal. Everyone made the best of a bad situation.

I can’t imagine what my parents endured. All I know is that they survived. As it became apparent the Japanese were losing the war, conditions deteriorated. Food became a watered down version of mush containing 500 calories per day. This is what my mother survived on during her pregnancy with me. I am amazed how healthy I was when born. I weighted a little over six pounds. My teeth are the only evidence of malnutrition. You do not want to know my dental bills.

Emotionally, my parents seemed fine. They knew there were a lot of people in worse conditions than them during the war. My guess is that they felt a little gratitude. No matter what their situation was, there was always a worse version. I try to remember that when my life goes off the rails. I try to find a little gratitude in all situations. The nature of the human spirit, being so resilient still gives me pause.

All prisoners came back to their homeland with nothing, dependent on their families to help them start over again. This was the same as the Japanese Americans that were interned in the US. Life started all over, again.

We live in such uncertain times now. But after learning that both my Japanese friend and I were at one time considered the enemy, we saw in each other our humanity. We had more in common than differences. That is what makes America so special, our shared commonality. We are all a different version of ourselves. Not better, just different.”

To kick off the 75th celebration of the end of WWII, the organization of civilian prisoners and their descendants are having a luncheon on March 2 in Long Beach to hear noted historian and author Jay Wertz describe the role of the Philippine Scouts in the defense of Luzon in 1941-42.

The public is invited to join the ex-prisoners, friends and family at this luncheon. For details of this event contact Sharon Davis at [email protected].

We all get to decide what we want to do with our stories. We can learn and grow or become stuck and limited. Just like Sharon, I believe the only choice is to look at what that experience is inviting us to learn.