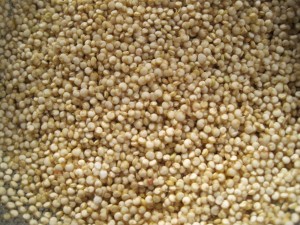 The United Nations declared this year, 2013, as the International Year of Quinoa (pronounced keen-wah), that tiny little seed that seems meant to be eaten only by birds. But in reality it is a powerhouse food that leaves the body filled with nutrients.

Three to four thousand years ago, the Incas called it “the mother of all grains.” Quinoa was one of their three staple foods along with corn and potatoes. They built their entire culture around planting and harvesting it, since for them it came from the gods and was considered a sacred plant that gave their people endurance and energy.

Quinoa mixed with fat rolled into balls was used to sustain their armies for many days on their long marches of conquest.

Quinoa is the seed of the goosefoot plant but is often called a supergrain, and it covers all the health corners of good eating: vitamins, minerals, proteins, carbohydrates, fats, and fiber.

Though sometimes referred to as a pseudo-cereal, quinoa is a broad-leaf plant, not a grass which most grains are considered. Besides potential allergies from grasses, grains contain gluten, whereas this little seed is gluten free.

This seed is also one of the most protein-rich foods to eat, containing an almost perfect balance of all nine essential amino acids. It is exceptionally high in lysine to help build other proteins, cysteine for proper functioning of the immune system, and methionine for normal metabolism and growth.

It also contains albumin, a protein found in egg whites, blood serum and many plant and animal tissues.

Quinoa also contains a significant amount of healthy fats. Compare the 350 calories’ worth of whole wheat providing one gram of fat with only 63 calories worth of quinoa providing one gram of fat. But the quality of the fat found in quinoa is what draws it apart. About 25% of quinoa’s fatty acids are a heart-healthy monounsaturated fat called oleic acid and about 8% alpha-linolenic acid or ALA, an omega 3 fatty acid. These fats are associated with a decreased risk of inflammation related disease.

Another benefit to reducing inflammation, significant amounts of certain tocopherols from the vitamin E family are found in this humble little seed. Along with high amounts of calcium, magnesium, manganese, iron and phytonutrients, quinoa’s carbohydrates have a low glycemic index since the seeds are digested slowly due to its fiber content. This helps the body lose weight more easily and improves blood sugar and cholesterol levels.

Quinoa should be on everyone’s list of healthy things to eat. From its ancestral black color to red, white or yellow, the different varieties provide slightly different tastes to please the appetites. And it’s so very simple to cook with countless recipes available to create enjoyable meals.

To prepare, simply place the quinoa in a meshed strainer and rinse the seeds of their saponin content under water. This will rid the seeds of their bitterness. Then cook with 1 cup of quinoa to 2 cups of liquid, water being the healthiest. Bring to a boil, pour the quinoa in, then turn down the heat to low and let simmer for 15 minutes. You’ll know it’s done when it looks like it has popped open, revealing the germ of the kernel. If you want a nuttier taste, dry roast it in a skillet over medium-low heat and stir constantly for five minutes before boiling.

Use quinoa as a replacement for other grains, mix it into salads, or chop some herbs into it. Try it for breakfast using the red variety instead and cook the quinoa with ½ cup lowfat milk, ½ cup water, then stir in cinnamon and berries. It’s easy to store, best kept in a glass jar in the refrigerator due to its fat content.

The Incas might have left hidden hordes of gold somewhere, but the true treasure lies in wait today within these little seeds we call quinoa.