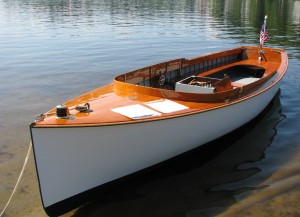 The word launch has many uses with regards to boats and boating. My specific use of the word for this column will be explained later.

During the 20s and 30s, the affluent owners of large yachts had motorized shore and passenger boats that were referred to as the “launch.” Smaller yachts had small motorless dingies stored on chalks to be used as row boats for shore service and excursions.

The reason I mention the above is to return to my boyhood Newport Harbor experiences and share the launch we rode in many, many times.

For scores of years, the Newport Harbor Yacht Club had a launch used as a shore boat that lacked a steering wheel. While one might think it is curious and unusual to be unable to turn the 18-foot vessel, in my youth it was quite common for a launch or small utility boat of this size to have similar equipment.

Emerson was the boat and yardman at the club during this era and also during my Dad’s youth at the club. He was a very experienced captain who had retired from a career of piloting freighters throughout Alaska. He not only operated the club launch but also helped the kids launch their small boats and answer any technical questions on our boat equipment.

The club launch had a console that stood waist high and about 2 ½ feet wide with a key, start button and gauges to monitor the engine functions. To the right of the console were two flat steel levers about a half inch thick and two inches wide about 3-feet tall which continued below the deck (floor).

A similar metal protrusion beside the transmission lever was for steering the launch. Upright position centered the rudder, when pushed forward the vessel would move to the right and when pulled back of center it would turn left. It was a simple way to navigate the boat and in the “Golden Era” of the 20s and 30s not that uncommon on motorized launches.

Now you know how small utility boats could turn without a steering wheel.

Future columns will include the adventures of a fleet of 40 or more yachts powering to Cabo San Lucas.