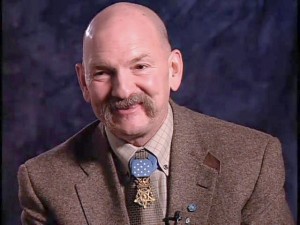 Medal of Honor recipient Gary Beikirch will be speaking at Liberty Baptist Church this Sunday, November 10, and the community is invited to attend.

Beikirch is a former United States Army soldier who received the United States military’s highest decoration, the Medal of Honor, for his actions in the Vietnam War.  Beikirch was a combat medic, and was awarded the medal for his heroic efforts during a battle at Camp Dak Seang in Vietnam. He continued to expose himself to intense fire in order to rescue and treat the wounded, and for continuing to provide medical care despite his own serious wounds.

“Gary is an amazing man with an incredible story,” said Eric Johnson, assistant pastor at Liberty Baptist. “Our church is excited to invite the community to come hear his story: we don’t just want to keep him to ourselves. He’s a wonderful patriot, he’s a humble man, and he’s truly inspirational.”

Beikirch will speak twice Sunday, and Pastor Dwight Tomlinson will honor and thank all Veterans for their sacrifice during the morning service centered around Veteran’s Day.

“Gary has been at our church two or three times before, and everybody loves him,” Eric said.  “He has a great story, but he’s very humble about it all. He just explains how God has worked in his life. But there’s a reason he was given the Congressional Medal of Honor. He was very brave for what he did; he wasn’t thinking of himself. I’ve heard him say that to truly live, you must be willing to die. As Christians, we’re called to learn to say no to ourselves so we can say yes to Christ, and yes to the needs of others around us.”

“I’ve never been in battle situations before,” Eric continued. “It’s fascinating to hear about what it was like to be in battle and about God working in the life of a soldier, helping him through all his battle experiences. He and Pastor Tomlinson met years ago and they were kindred spirits. They both fought in Viet Nam, and as they got to know each other, a close friendship formed.”

Beikirch’s Medal of Honor citation reads, in part: “Sgt. Beikirch, with complete disregard for his personal safety, moved unhesitatingly through the withering enemy fire to his fallen comrades, applied first aid to their wounds and assisted them to the medical aid station. When informed that a seriously injured American officer was lying in an exposed position, Sgt. Beikirch ran immediately through the hail of fire. Although he was wounded seriously by fragments from an exploding enemy mortar shell, Sgt Beikirch carried the officer to a medical aid station. Ignoring his own serious injuries, Sgt. Beikirch left the relative safety of the medical bunker to search for and evacuate other men who had been injured. He was again wounded as he dragged a critically injured Vietnamese soldier to the medical bunker while simultaneously applying mouth-to-mouth resuscitation to sustain his life. Sgt. Beikirch again refused treatment and continued his search for other causalities until he collapsed. Only then did he permit himself to be treated. Sgt. Beikirch’s complete devotion to the welfare of his comrades, at the risk of his life are in keeping with the highest traditions of the military service and reflect great credit on him, his unit, and the U.S. Army.”

Beikirch will be sharing his story at 9 a.m. and again at 5 p.m. The events are free. The regular Sunday service is at 10 a.m. For more information, go to libertybaptistchurch.org.