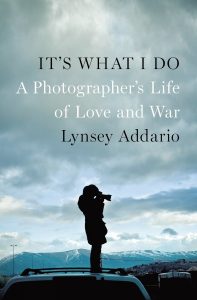 This month, the Newport Beach Public Library Foundation will kick off the 20th season of its acclaimed Witte Lecture Series. The Witte lectures strive to “encourage dialogue on key topics, including the environment, geopolitics, science, technology, economy, the arts, humanities, and other relevant issues of our time.”

Of this milestone season, Foundation Executive Director Tracy Keys says, “To honor the 20th anniversary of this important series, we have secured some of the best and brightest minds in a variety of fields to share their knowledge with the community here in Orange County.”

If their leadoff speaker is any indication, we are in for quite a treat with this year’s lineup.

The season will begin on Saturday, October 29, with featured speaker, and renowned photojournalist, Lynsey Addario, as she discusses her book, “It’s What I Do: A Photographer’s Life of Love and War.”

Addario, who has earned not only a Pulitzer Prize for her work as part of the New York Times team for International Reporting, but also a MacArthur Genius Grant, and the Overseas Press Club of America’s Olivier Rebbot Award for Best Photographing from Abroad, began her career in 1996, working for the Beunos Aires Herald with no formal photographic training. In 2000, she journeyed to Afghanistan, to document life under the Taliban, and her career telling the story of the world’s conflicts through photos was born.

In 2001, when the tragedy of 9/11 threw the nation into a tailspin, Addario was called upon, as one of the few photojournalists with experience in Afghanistan, to return and cover the American invasion. Since, she has told the story, through her lens, of conflicts happening in places such as Iraq, Darfur, Haiti, the Congo, and Syria. She has made the decision time and again to forego her personal comfort and safety in order to bring these stories to light, putting the story, often, above all else.

In “It’s What I Do,” Addario chronicles this journey. She tells of having to strike a balance between family and career,

and of the tough road she had trying to earn respect as a woman in a man’s field. She shares how becoming a wife and mother cast the stories she bore witness to in a new light, as well as details of the times she was captured by militants, fearing that she may never return home.

On one such occasion, while covering the fighting in Libya between rebel troops and Moammar Gadhafi’s army, Addario and three fellow journalists were taken captive. Held for a week by pro-Gadhafi forces, she suffered physical abuse, constant groping, and an ever-present fear of rape.

Despite the desperation of her situation, Addario recalls taking comfort in the fact that even if she didn’t survive, her body of work would stand. For someone who had made a life chronicling moments that may otherwise have been unknown to the world at large, that fact was paramount.

In an interview with NPR, she recalled, “I remember the moment in which we were taken hostage in Libya…we were each begging for our lives, because they were deciding whether to execute us…and I remember thinking, ‘What am I doing here?’ Like, ‘How much do I really care about Libya?’

And then I thought, ‘Will I ever get my cameras back?’ which is the most ridiculous thought, of course, when you’re about to die…but you know, for me, that was how my brain worked.”

And now, that amazing brain, which has risked death to share the stories of soldiers and refugees, militants and disenfranchised women, will bring its incredible body of knowledge here to Newport.

An unparalleled opportunity to hear of the world’s plight from one of its chief witnesses, this will be an event not to be missed.

Tickets are $50 each, or $45 for foundation members, and include a wine and cheese reception, lecture, Q&A, book signing, dessert, and coffee.