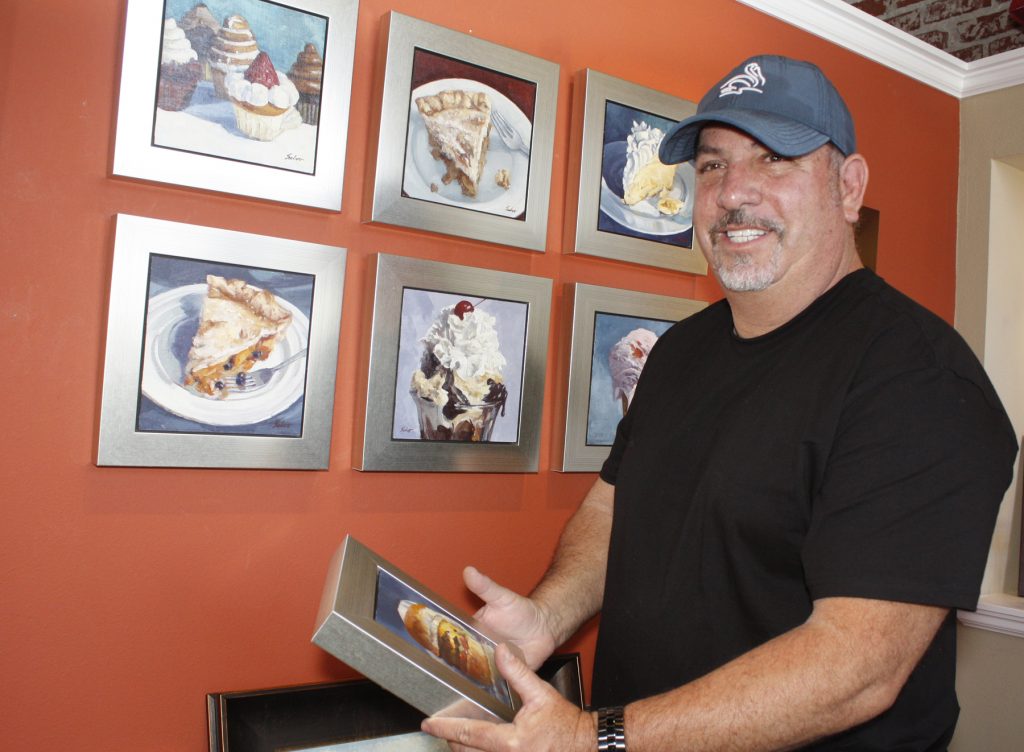 Tony Salvo has an obsession with food.

In fact, the Newport Beach-based artist whose studio is in an historic brick building that once housed a fire station on Balboa Peninsula loves to paint everything from pies to burgers, and then eat them.

Salvo spent 20 years running a boutique graphic design and advertising company on the Peninsula, but took up plein air painting in 2007 and discovered he was good at it. So good that he gained notoriety in art circles, and was invited to be part of Studio 7 fine art gallery in Laguna Beach. 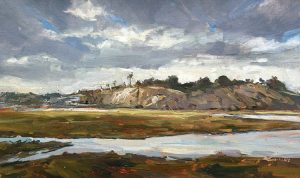 However, it was Salvo’s lifelike paintings of cupcakes, sundaes and apple pies that caught my eye at the Balboa Island Artwalk in May. The Indy was to present an award to the artist of my choosing. Salvo’s display included beautiful plein air landscape paintings, but…maybe I was hungry, maybe it’s because I always have food on my mind, but the artwork stood out as something fun and different.

Tony won the Indy’s Artwalk Award, but I was curious as to how someone decides to start painting food.

“It was my mom’s apple pie that started it all,” said Salvo, who recalled watching her bake apple pies when he was a kid. He 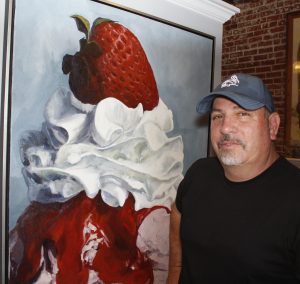 recreated her recipe several years ago and made a pie, then painted it. That started him on a series of food paintings, from small six by six pieces to larger-than-life paintings.

To achieve his realistic culinary paintings, Salvo designs and assembles the food items, photographs them, and then paints them.

“I’ve become really good at painting desserts, they’ve been a real hit,” admits Salvo. “I think it’s about being a plein air painter, and the lighting of the food. I love doing it, and eating it. It’s a passion.”

Salvo has taken his love of food to another level by compiling a cookbook filled with recipes from his childhood, accompanied by black and white photos of his family. 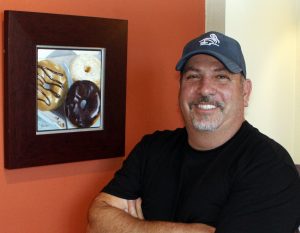 “It’s the food we ate growing up—homemade meatballs, Sicilian pizza, things like that. I’m thinking of publishing it and selling it, but I’ve never done that before,” stated Salvo.

Of course, Salvo had never done food paintings until a few years ago, so never say never.

Salvo’s work is in the Studio 7 gallery and is available through his website at SalvoFineArt.com, although he’s also spent several summers as one of the artists displaying and selling both food and plein air works at the Festival of Arts in Laguna Beach.

“I sat there all summer, with three thousand people every day, and the comments I got on my artwork were amazing,” recalled 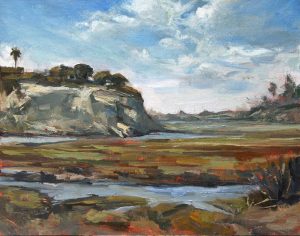 Salvo. “A lot of people won’t buy my work because they want to eat it all day long. I never ever thought of that, and I don’t get it, but that’s okay. But then some people said I have to have this. A teacher of mine once said that no reaction is not so good, so at least I am getting comments.”

And this weekend, Salvo will be getting comments on his plein air paintings. He’s been selected to participate in the annual SOCALPAPA Paints OC Parks & the Back Bay Art Show and Sale, July 16 and 17 from 10 a.m. to 4 p.m. at the Muth Interpretive Center, 2301 University Drive in Newport Beach. Visit socalpapa.com for more information.