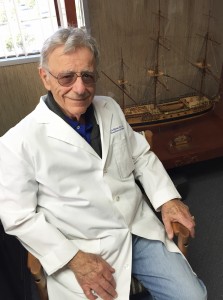 On a whim 30 years ago, ENT Doctor Henry Bikhazi of Newport Beach stopped in a hobby shop on the way home from his office, and immediately fell in love with the model sailing ships on display.

On his second visit (or whim), Bikhazi walked out with a $600 model boat kit that seemed to have more parts than the sum total of all the pages of his medical books.

Upon opening the box, he realized quickly that maybe facial reconstructive surgery would be an easier task than assembling a ship model whose nomenclature was as foreign to him as human anatomy probably would be to a deck hand.

Undaunted, Bikhazi set up a workbench in his garage and started the tedious task of assembling the thousands of hard-to-see (and grasp) parts.

Admittedly needing help, he joined the Ship Modelers’ Association of Orange County, an assemblage of engineers and assorted “experts.” When they saw Bikhazi’s first attempt at the model, “they laughed,” he recalled, although shortly after “they told me not to take it personally.”

As he left that inaugural meeting, Bikhazi said he felt like dashing his work to the ground, but admitted “I should never have started such a project without looking at the directions.”

As he did throughout medical school, Bikhazi put his all into learning the intricacies and complexities of sailing ships, especially those of British, French and American manufacture in the mid-18th and 19th centuries.

This was the period when three- and four-masted ships of the line attained the ultimate in wind-driven evolution; when a first-rate naval ship required thousands of straight-grained oak trees to be cut and sawn, then steam-bent into nearly manageable frames, planks and beams, and wales and masts and deckhouse sidings, and ladders and railings and figureheads.

Always the perfectionist, Bikhazi realized that available boat kits, even the most expensive, were never accurate in their plans and were stuffed with inferior woods and other materials. Additionally, it didn’t require the level of skill that he felt should go into such pieces of art.

Eschewing any more trips to the hobby shops, Bikhazi instead sent away for the complete plans of the HMS Bounty. From that day on, he was to become a

It was not uncommon for Bikhazi to fashion a single, tiny part up to three times until micrometer accurate, even though it may only have been glued ingloriously under a deck 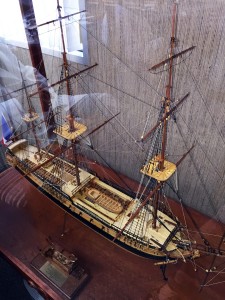 To the fellow ship builders in the Ship Modelers’ Association, Bikhazi is now admired as a perfectionist. A star.

Upon completion of the Bounty, he plotted a course to his first model competition – and won. Some years later, in 2006, Bikhazi entered five models in the woodworking competition of the San Diego Country Fair.

Disappointingly, he took fifth place…and also fourth, third, second and first.   Competitors howled, but their complaints trailed off in the wind. Perfection ruled the waves that day.

Bikhazi admits that he has a talent for fine woodwork, but he feels that his greatest attribute is patience.

“In the art of perfection, there’s no way out of it. Judges can tell if something isn’t right,” he said. But before that, Bikhazi can tell if something isn’t right. Perhaps that is one reason why some of his larger models have taken up to five years to complete.   Another reason is that he is a full time medico with offices in Newport Beach, and Whittier, and is a full time husband.

Patti, his wife of 38 years, and Bikhazi have four children together: two are ENTs, one a mechanical engineer, and their daughter is about to graduate dental school. None share his passion for woodwork, or ships. But obviously, they all share some of the DNA residing in dad’s gray matter.

The good doc fell off on a different tack recently, and is now scratch building fine furniture in a rented workshop in Costa Mesa. As with his model ships, his woods are rich and exotic; his joinery flawless, the seams and joints as smooth and flawless as a polished slab of premier Italian marble.

If Dr. Bikhazi isn’t tending to his patients, he’ll be tending to his “patience” as he continues to produce world-class model ships and designer furniture for which he has become internationally known.