Before she ever picked up serrated wires, wooden tools, paddles, shapers or scrapers to mold huge, gray globs of clay into life-like busts, Newport Beach artist Miriam Baker knew she would forsake her oils, brushes and canvases to become a sculptor.

“I could feel it in my thumbs,” she recalled.

That was nearly 25 years ago, at which time she deep-sixed her career as an interior designer to devote her creative life to sculpting likenesses of both famous and not-so-famous personages that are so realistic in their life-sized countenances, you’d expect them to break into laughter if you joked in their presence. Or to cry out if you tripped on the carpet en route to placing them on the mantel.

By virtue of history and film, most people who saunter past Miriam’s South Bay Front home on Balboa Island recognize many of the faces that seemingly gaze beyond her bay windows: movie stars, musicians, politicians and business tycoons, all staring outward with alive eyes, challenging those on the outside looking in to a staring contest.

Despite the fired hardness of her finished products, each sculpture seems sensate; and that is the art – the capture of a someone’s essence for perpetuity, or until that clay-shattering “big one” hits.

To stand before their likenesses, you can almost hear yourself in conversation with such luminaries as composer 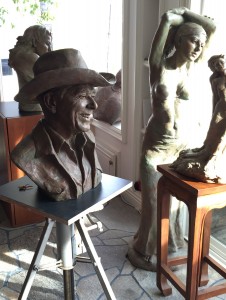 Miriam’s works reside countrywide, from the National Portrait Gallery in the Smithsonian, to Stanford University; from Chapman University (where 24 bronzed portraits honor generous patrons and academics) to the University of Illinois, Urbana-Champagne; from UCI to the Academy of Television Arts and Sciences in Hollywood, as well as in many private collections.

Miriam’s artistic potential was recognized early when as a kindergartner in Chicago, she presented her first drawing – “a horse with udders,” Miriam chuckled in remembrance.

But this humble, yet genetically imperfect chimeric drawing led to her receiving a one-year grade school scholarship to the Chicago Art Institute.

She literally forced her next artistic opportunity while in high school after the family had moved to Southern California, when she refused to pay attention in her Secretarial Sciences class, which was mandatory for all girls at that time.

While others learned the flairs of shorthand, Miriam sat back and defiantly read “Uncle Tom’s Cabin.”

Her teacher tossed Miriam unceremoniously into an art class instead.

However, at that time, Miriam said, art wasn’t a career consideration. After high school, she attended East Los Angeles Community College, where she earned her Registered Nursing degree (her other choices were teacher or secretary). She then ministered at the UCLA Medical Center while putting her first husband through college. Soon after, she quit to raise a family.

At the age of 27, Miriam began oil painting in earnest, taking classes privately a couple of times a week. Within two years, the student became the teacher. Simultaneously, she started an interior design business, from which she retired extraordinarily successfully after 30 years. Her clients included corporations such as Deloitte and Touche, and Earnst & Young, as well as Mission Viejo Company, for whom she helped to entice potential homebuyers with her comfy interior designs.

Although necessarily with some portraits she has had to work off paintings or photographs, Miriam prefers live subjects, whom she poses in her downstairs studio. With front door open to invite in the harbor light, Miriam manipulates and carves her “living clay” into remarkable portraits – a process that requires up to 50 hours of work per head, plus the time for bronzing.

Most are patient subjects, she said, but one internationally known political type was most disagreeable and impatient, giving at most 15 minutes of modeling time, and only twice at that.   So as to not perpetuate his etched-in sour demeanor, Miriam had to scan through dozens of old news photos just to find a couple showing a semblance of a smile. These she carved into his scowling face. And because Miriam cared, he now looks like a friend you’d like to cultivate.

And no, she will not divulge his name.

Price tags for a bust range from $10,000 to $13,500. Her largest sculpture to date is the life size statue of Ronald Reagan in Bonita Canyon Sports Park, for which she was paid $50,000, and from which she saw little return. The bronzing of the statue alone cost $25,000, not including marble base with three giant bronze plaques. She garnered far more recognition than profit for her wrist-fatiguing efforts on this project.

Every sculpture is a joy to produce, Miriam says, but perhaps her favorites are those of her children and grandchildren spotted around her home. As they all grow, she knows that she’ll never run out of subjects.

Miriam claims that she can teach anyone the mechanics of sculpting, but that doesn’t make the student a portraitist in clay.

For that, she reminds, “You should feel it in your thumbs.”