But then, few people go to work at an office such as his, where every day a nonstop parade of both sea and terrestrial life passes in front of his bay-view window next to the ferry dock on Balboa Island.

Doughty is the owner of JD’s Big Game Tackle, an equipment-cramped store that is as much a fishing tackle museum as it is a retail outlet that offers everything from fishing gear for novice anglers to hard-to-find drop lines and rods and reels with hefty price tags aimed at serious big game fishermen, who demand nothing less than state-of-the-art gear to enhance their chances of landing a prized catch.

Since he was a boy, Doughty has been fishing Newport. In his 66 years, he has learned so much about fish, fishing, fishing zones and fishing equipment that he should have evolved gills.

And like the nerdy kid who wanted to become a nuclear physicist after seeing his first picture of a mushroom cloud, JD dreamed of owning a tackle store on the island the first time he dipped a hook off Balboa’s public docks.

That dream came true in 1976, after a 10-year career on the road as a fishing gear salesman.

“The choice to settle down was easy:  I looked inland, and I looked out to sea. Then I reasoned why sell dollar fishing tackle to outdoors retailers when I could sell fishing lures for $50 to 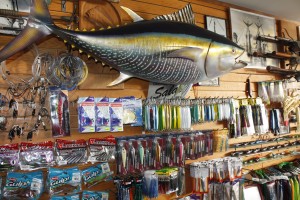 a more affluent customer on the water.”

Doughty does sell both, but in what he says is “the most beautiful environment there is.”

The fishing business is a fluid business, which in large part is dictated by two inexorable forces: nature and economics, each seemingly as powerful as the other.   Technology is perhaps less dynamic, but it, too, exerts an influence on the sport.

The longitudes and latitudes where knowledgeable sportsmen choose to catch game fish along with their smaller cousins has to do with varying factors such as ocean salinity, water and air temperature, wind, wind stress, currents, sea conditions, chlorophyll, tides and more, according to Doughty.

Doughty accesses that data via websites from various government agencies, such as NOAA (National Oceanic and Atmospheric Administration), and other online fishing sites. Of course, micro-conditions are reported regularly via radio from local fishing boats.

Doughty monitors all the channels and websites throughout the day, then replays them on his website, thereby making him an instant source of fishing intelligence for the many sportsmen who voraciously consume the info via the Internet or who stop in to chat.

Although it’s argued that information flowing nonstop like a tidal current, coupled with shipboard fish-location sensors and satellite technology, takes the sportsmanship out of the sport, Doughty rejoins by stating, “You still have to hook and land the fish, and it may not want to bite.”

Fuel costs may be the one factor that has dramatically changed both the economic and social dynamics of sport fishing.

Boaters could afford to run up to 200 miles in one outing. Today, with fuel in the $4 to $5 per gallon range, a day trip could tally up to $1,000 in fuel costs alone – not counting beer. That translates to very expensive fish.

So now, “Deep sea fisherman will head out for three or four days to offset the cost of fuel; however time and expense have minimized the number of people going offshore,” said Doughty.

The drop in the number of deep-sea fishermen has translated to a reduction in equipment sales, thereby driving up costs of all things “fishy” including rods, reels, line, and boats.

However, one needn’t be a millionaire to enjoy fishing.  Doughty sells a starter set

for $39.95.  At the upper end, one can buy a flashy carbon fiber rod as sleek as a Ferrari partnered to a jewel-precision reel of the highest caliber for $2,500.  Could a fish really sense the difference in their nerveless lips once hooked?

Instead of big yachts, fishermen are taking to small, fast boats, 18- to 25-feet long, and braving open water to catch and release a broad variety of fish.

Or they’re crowding aboard commercial fishing boats whose skippers know where fish such as rock cod, sand and calico bass, halibut, perch, croaker and yellow tail hang out.

For Doughty, the art of fishing actually starts in his back shop, where he eschews modern materials to handcraft custom saltwater rods from carefully angled strips of primo bamboo—a nearly lost art that reached its zenith before WWII.

Each rod can take up to 100 hours to complete, and costs between $650 and $900, which means Doughty could make more money serving fries at McDonald’s. Of course, at the Golden Arches, fish stories don’t come with the service.

Today, fishing is as much science and technology as it is luck.  So much has changed in the last 15 years, from the new woven braid fishing lines that are virtually indestructible and invisible, to silicone fish lures that look so real and alive they could hang with schools of fish and not be accused of deception.

Of course, if you’ve some spare bait money, Doughty offers gyroscopically stabilized binoculars that take the rock out of the boat when holding them on target. Yours today for only $5,000.

For a fact-packed experience in all things “fish,” stop in at JD’s Big Game Tackle, or tour his website at jdsbiggame.com.