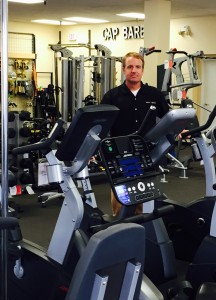 Going to a crowded gym often is an exercise in frustration.

A well-designed, 30-minute workout can stretch into more than an hour when one considers the time to commute back and forth from home or office, wasted minutes while waiting for pieces of equipment because muscle bound (or muscle-headed) sweat hogs take ownership of their favorite pieces of equipment, and the lines at the juice bar that move more slowly than the viscous mixes of fruits, veggies and powdered mysteries that defy gravity when tipped toward one’s lips.

There’s a simple solution to the above.

“Exercise at home,” says Marc Moore, marketing director and resident fitness consultant at Busy Body, the home fitness equipment store in Newport Beach, one in a chain of eight in Southern California.

According to Moore, this particular store has been at the same Bristol and Jamboree location for more than a quarter century.

“We’re now seeing the kids of original customers coming in to purchase their own home gym equipment,” Moore said.

On the surface, Busy Body sells fitness equipment – everything from $12.99 rubber resistance tubes and bands up to sophisticated pieces of machinery that’ll herniate the credit card at $12,000.

The only thing missing on the latter is an “app” that promises a post-exercise Swedish or Thai massage.

There are dozens of equipment choices from such quality names as Life Fitness, Hoist Fitness, Vision Fitness, Octane Fitness, and LeMond Fitness, plus several others who have decided not to tack the word “fitness” onto to their labels.

And because the company only purchases ship container-sized volumes, and pays strictly with cash, Moore promised the absolute lowest prices anywhere.

“We don’t even price match, because we’re always substantially lower,” he said.

Busy Body’s demographic does not include the bodybuilding guys, primarily because their equipment is so heavy that it requires muscle-bound foundations in a commercial environment.

“At least 30 percent of our customers come to us because they’ve been scared by their doctors,” Moore estimated, a number based on his two decades in Busy Body retail.

“They’re suffering heart disease, obesity, and diabetes, which lead to myriad other problems,” said Moore, who studied Biology at San Diego State University, and understands the workings of human anatomy.

Also among that 30 percent are recipients of knee and/or hip replacements, who need to rebuild their strength and stability. Moore describes the remaining customers as “healthy people, the-use-it-or-lose-it types who want to remain on top of their game for as long as possible, and who feel that a strong body could very well extend the functionality of their lives.”

Although most purchase that one piece of equipment they’ve determined best satisfies the goals they’ve set for themselves, a rarified few will buy entire home-gym set-ups, and will spend upwards of $125,000 for the latest and greatest.

One customer recently bought two complete professional sets for his homes in Malibu, and Beverly Hills. But, said Moore, that’s a unique event.

Seventy-four-year-old retired dentist Alan Mayer, who splits his time between his Oxnard home and his brother’s Newport Beach residence, always travels with a set of easily packed resistance bands. He prefers home workouts to the gym “because my equipment is always there whenever I want to exercise, I can interrupt my regimen to answer business or personal calls, and I do it all in personal comfort and in a familiar atmosphere. Plus, I never have to worry about anyone else.”

In reality, Moore admitted, people can exercise without the use of equipment, but “equipment does make exercising more appealing, more efficient and more entertaining.”

However, if one were to ask Moore which of all the options displayed on the showroom floor he’d choose, he said he’d select a “functional trainer.

“These seem to be the trend for now, but they’re also the wave of the future,” he opined. “You can literally do a thousand different exercises on this one piece of equipment,” Moore said, adding, “These machines work the body as a system,” unlike when working with weights that most often only isolate one muscle group at a time.

Recently, in just a matter of minutes, Moore and a group of personal trainers identified 1,500 individual exercises that could be done with just one functional trainer.

Said Moore, “Today, most commercial gyms have at least one functional trainer on the floor. We’re selling lots of them to hotels, private corporations and to fire and police departments.”   Versatility isn’t the functional trainers’ only attribute, they’re very space efficient, as well, he suggested.

Advertising claims by auto manufacturer Subaru state that up to 90 percent of their cars are still on the road after 10 years.

Similarly, well-built exercise equipment can easily motor along for 15-years or more.   According to Moore, “Most return customers replace their equipment not because it has worn out, but because they just want something newer.”

This writer has been a home-exercise-in-front-of-TV-news aficionado for decades. And unlike me, most gym rats at the end of their 60-minute workout can’t claim they’ve “rowed” from Hollywood, to Afghanistan; from France to Buenos Aires, then while still sweaty discuss the latest world happenings per Wolf Blitzer.