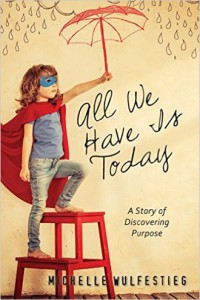 “I wrote in my diary when I was 13 years old that I was going to write a book to help people with whatever they are struggling with,” explained Newport resident Michelle Wulfestieg, 32. “God put it on my heart way back then. Actually, I didn’t write the book, God wrote it through me.”

Wulfestieg’s book “All We Have Is Today: A Story of Discovering Purpose,” was released last August and has already won three National Book Awards, all gold medals.

The book is a memoir chronicling the struggles and victories in Wulfestieg’s life as she coped with two debilitating strokes at ages 11 and 25, and how she courageously dealt with two brain bleeds, an agonizing recovery process, and other monumental challenges.

“Many times I wanted to give up, but I knew God had a purpose for my pain,” she said. “God can use the worst things in our life for the greatest things if we can trust Him and let Him use us. I want to communicate that if I could come out of all I went through, then others can too.”

“When I came out of my coma after my massive stroke and near-death experience at age 25, I knew that I had to

return to work and that I had to write the book,” Wulfestieg continued.   “Writing it was a big part of my recovery process. It helped me make sense of what had happened to me. It took almost five years to write.”

Wulfestieg began her career in hospice at 21 and today serves as executive director of the Southern California Hospice Foundation, which helps approximately 3,000 terminally ill children and adults a year.

“At first I didn’t know how to write my name or form a sentence,” she said. “But I started with one sentence and then a paragraph and then a page and then a chapter. It was all typed with one hand and I had a damaged brain, but I knew it was a story that had to be told.”

Wulfestieg had no writing background so she began taking writing classes through the city of Newport Beach.

“I took classes for years with Dorothy Spirus,” Wulfestieg explained. ”She said the best gift you can give yourself is to finish. When I finally did, it was 90,000 words but by the time it was edited down, it was 42,000 words. It was not an easy task; writing is so much work. It was an act of obedience to God.”

After over 100 rejections, Wulfestieg finally found an agent who believed in her story and helped create her memoir.

She still has partial paralysis on her right side, but it doesn’t slow her down. She believes you can’t control what happens to you, but you can control how you react.

As part of her job, Wulfestieg shares her story at schools, colleges, hospitals, and churches throughout Southern California. She feels a profound sense of purpose to help those nearing the end of life, and to talk with those losing loved ones.

“I was in a coma for eight days, and I encourage those who have someone in a coma to talk, sing, and pray with them. That brought me comfort,” she said. “It’s part of my story, and we all have a story to share, but it takes courage. You have to be patient with yourself and choose to enjoy it. It’s been quite a journey. All of my successes are because of God.”