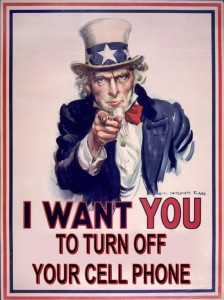 Like most typical teenagers, I was constantly on the phone. That was back way before cell phones, but regardless, I spent mind-numbing hours in my room talking to my BFF’s about what we were wearing to school the next day, the cute football player we had a crush on, and how dorky our math teacher was…why did we need to learn algebra anyway? It was our way of belonging and feeling important in our young, naïve world.

But when Mom called us to dinner, the house rule was the phone had to be hung up, and we sat down as a family at the dinner table with no distractions. I broke this rule once while in a heated discussion about the coming prom and who was going with whom. Not a good idea.

The next thing I knew, in walked my Mom who, without pause, promptly yanked the phone cord right out of the wall. Suffice to say, after the phone company came and repaired the jack, I never made that mistake again. Her message was loud and clear: family comes first, not the phone.

I bring this story up because more and more, I feel the need to establish cell free zones both at home, work and in public. At times it feels like we use our phones to avoid human interaction, at least the meaningful kind, especially when it comes to texting. How pithy can any text possibly be?

I know I am not alone when it comes to the subject, particularly after I was rear-ended a few months ago by a teenager who was looking down at his cell phone. He had just gotten his driver’s license the day before. Yikes.

It goes without saying that cars and cell phones don’t mix. And it’s not just teenagers. While driving to dinner one evening, a friend in our car spotted a co-worker next to us. We tried without success to get the friend’s attention, he was reading a text on his phone and it must have been a good one because we honked, we waved, but to no avail. He was completely, totally immersed as we drove next to him. Scary.

Not to be the pot calling the kettle black, I am as guilty as anyone of being too connected to my phone. I consciously try to put it away especially during meals, but find myself with a nervous twitch wondering what I might be missing, which of course, is usually not much. At least not anything that can’t wait.

As a former boss used to say, “unless you are responsible for curing cancer or creating world peace, it can wait.” And she was right.

I feel the true hazard behind our reliance on “smart” phones is the dumbing-down of our culture. “People don’t like thinking hard,” says Clifford Nass, a professor of communication and computer science at Stanford University. Constantly consulting your smartphone, he says, “is an attempt to not have to think hard, but feel like you’re doing something.”

Yup, I’m guilty of that too. We all like to feel important, needed, wanted. Perhaps we are relying on our phones to provide these basic human needs.

When my Mom ripped the phone out of the wall, she was driving home a point. When I think back on it now, I feel she taught me not only to respect our house rules, but also that it was important for me to participate in our together time. My presence at the dinner table was not just a requirement; she was showing me that I was a valued member of our family.

It’s frightening to think of what I would have missed if she hadn’t put her foot down when it came to that darn phone.