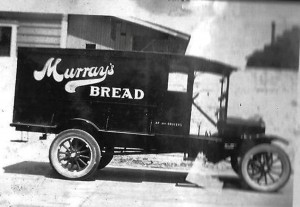 Like most Americans, I come from a family of proud immigrants. My grandmother’s family made the harrowing trip across the Atlantic from Ireland in the late 1800’s and opened the Murray Baking Company in Los Angeles. As a kid I remember the story of my great- grandfather, having come from poverty himself, handing out bread to hungry families in L.A. during the Depression despite having a brood of six to feed.

My maternal grandfather emigrated from Barcelona, Spain, when he was just a young boy. His father, wanting a better life for his family, took a chance and traveled alone to California in 1916, working in San Juan Capistrano for the Moulton family until he saved enough money to bring them to the States. They too settled in L.A. where my great-grandfather worked as a butcher.

As teenagers, my younger brother and I would roll our eyes at each other across the dinner table as my grandfather would tell us these stories and emote on how important it was for our relatives on both sides to become Americans.

These homilies where especially fervent on patriotic holidays like 4th of July, when he would speak passionately for his love of country, instilling in us the importance of not taking for granted what it meant to live in the United States, and that being an American represented individual freedoms and opportunity, something immigrants all over the world hungered to experience, and risked their lives to achieve. I would ardently nod my head and excuse myself in order to avoid the “you don’t know how great it is to be an American” lecture.

Now I wish I would have listened more carefully. Decades later, I wish I could tell my gramps how right he was and how much I appreciate what he and his parents went through in order for me to enjoy life as an American.

I have often mused over my Grandpa’s zealous patriotism, and have come to realize that because he was taught by his parents early in his life the value and importance of assimilating, not taking for granted the gift of freedom – of pursuing his dreams, economically, politically, religiously and personally – that he felt it critical we not take it for granted either. He wanted us to have respect for what it meant to have the opportunity to reach one’s highest potential. Only upon reflection as an adult do I realize the wisdom of his words.

Because his parents wanted to learn English as soon as they could in order to better their lives, my grandfather and uncle were required to speak English at home. Back then, it was vital to achieving the American dream. It never occurred to me that his “lectures” would become a major point of contention in the world I live in today. I wish I could talk to him about it now. I wonder what he would say about the concerns we mostly keep under politically correct lock and key.

My grandparents also taught us about our rich cultural heritages, and gramps retained his ability to speak Catalan and Castilian fluently all his life. We visited Spain together and his pride in his birth country was something to behold, but I can still hear him say “I am an American first!”

My grandfather and his brother worked tirelessly to build a successful company that created modest wealth for them both, and established a legacy for our family of hard work and achieving the American dream against all odds. He would constantly say, “In what other country, can you come from nothing and reach the stars?” How many times did he tell me that hard work and living within our means was the way to prosperity? In these days of economic “recovery” across our great country, his words have never meant more to me.

As we enjoy this week’s 4th of July celebrations, I will be missing my gramps. No matter how many times we’d head to the Rose Bowl for the annual fireworks celebration, he would never lose his enthusiasm for what it meant to him to be an American.

With tears in his eyes as the fireworks blazed and Sousa’s “Stars and Stripes Forever” blared, he’d remove his hat and victoriously wave it in the air. At Dodger games he would shamelessly belt out the “Star Spangled Banner.” I can still hear his voice above the crowd, “…O’er the land of the free and the home of the brave.”

Times have changed, and we live in a world on international real time, where the distinction of being an American is sometimes skewed by political agendas, blurred by pop culture, or worse, obliterated by downright disrespect for those who came before us or sacrificed life and limb to make and keep this country great.

But this 4th of July weekend, as we boat, barbeque and share time with family and friends in celebration of our country’s founding independence, I’ll be thinking of my Grandpa. I’ll be thanking my lucky stars that because of him and my other family members who came before me, that I live in America. The land of the free, home of the brave, where freedom still rings and we are able to live the great life we do here in Newport Beach.

Columnist Lynn Selich resides in Newport Beach. Listen to her live every Sunday on KOCI 101.5FM on the “Sunday Brunch with Tom and Lynn” show.