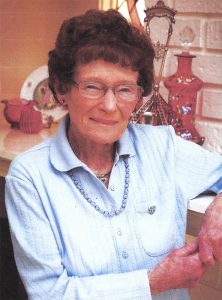 The “darling of Spyglass Hill” is having a birthday on April 3, but don’t ask her to blow out the candles on her cake—there will be 100 of them!

Yes, Mary Layton, a longtime resident of the Spyglass Hill neighborhood in Newport Beach, is turning 100, and she’s ready to celebrate.

According to a recent article in the Spyglass Hill Neighborhood News, Mary heard about Spyglass Hill when it was being created in 1972. Upon her initial visit, she recalls that the sales trailer was set up where Spyglass Ridge is now, and framing had begun on a few homes in lower Spyglass Hill. After walking through a couple of homes under construction, she chose the second one she looked at and went to work convincing her husband, Glenn, that they should move there from Santa Ana. After he saw the property, it didn’t take much convincing.

Mary was born in Anaconda, Montana, a copper mining town. She lived there until she was 12, when her family moved to the City of Orange.

If her last name sounds familiar, it’s because Glenn became the pioneer in soft-water conditioning for the entire country while forming Layton Soft Water. Glenn, two of their sons, and a daughter worked side-by-side there, eventually selling their business to a former archrival, Culligan Soft Water.

When Mary’s not cheering on the Anaheim Angels, eating at her favorite restaurant (La Chiquita in Santa Ana), playing bridge, going to the horse races, or attending neighbor­ hood Spyglass Hill Garden Club functions, she can be found spending time with her family—which now includes her five children, 22 grandchildren and many of their spouses, as well as 50 great-grandchildren.

When asked to name any other place in the world where she’d rather live, she told the Neighborhood News that “I don’t need to leave; this is beautiful Southern California and Spyglass Hill has the friendliest neighbors, best locale and greatest views!”

In honor of Mary Layton’s 100th birthday, Newport Beach Mayor Brad Avery – on behalf of the entire Newport Beach City Council – has issued a formal proclamation recognizing and honoring Mary “for her century of accomplishments and loving family.”