My friend Jean, a fellow Newport Beach native, suggested I join a group on Facebook called “I Grew up in Newport Beach Before It Was the OC.”

I was leery about joining any group on Facebook. But then I read the description to the left side of the home screen:

“If you ate ice cream at Wil Wrights at Dover and Coast Highway, water skied the back bay, remember when Coco’s was the Snack Shop, or listened to the organist at Richard’s Market then you remember Newport Beach before it was the OC. Share your memories and pictures from the Newport Beach we remember!” 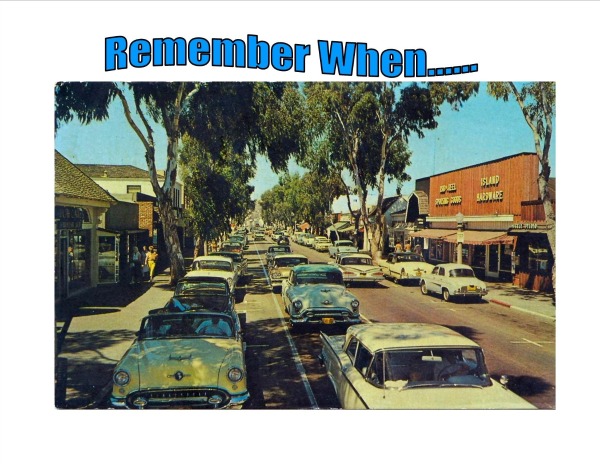 A chord was struck, a memory of my dad and I in the little pink ice cream store. This was followed by an entire concerto of memories. An unexpected sense of nostalgia swept over me and then I realized: I am old enough to pine for the good ol’ days.

Apparently there are a lot of us out there. The group has almost 4,000 members who share memories and post photos.

The photo someone posted the day I joined the group was of a horde of kids climbing on and swimming around the big plastic blue whale in the middle of the bay in Newport Dunes. I remember those summer days swimming out what seemed like a mile to the blue whale. It was always a bit of a surprise to me, the contrast between the brilliant blue from far away, versus the chipped and worn whale up close.

There are few places in America that have undergone such a radical transformation as Newport Beach in the last 40 years. I joined the “I Grew up in Newport Beach before it was the OC” group if for no other reason than for posterity’s sake. We can be the curators and the keepers of our city’s great history, so entangled in many of our own personal histories.

Sailing lessons in the bay, bonfires near the Balboa Pier, midnight showings of “Rocky Horror Picture Show” near Orange Julius. I could fill an entire column listing memories of growing up in Newport Beach.

Looking back, I realize that I took for granted what a unique place it was to be raised.

When I was 15 years old, before I could drive, my mom would drop me off at the ferry, and I would take it across to get to work. Walking pass the Fun Zone, the smell of fresh pizza baking, Balboa Bars, seagulls, t-shirt shops, all part of the backdrop as I made my way towards my job inside the Balboa Pavilion.

I would pull open one of the large wood doors, barely glancing in Davey’s Locker’s windows at the photos of people proudly smiling with their catch from the chartered fishing trips out of Newport. I walked past the enormous carpeted staircase with a heavy shellacked banister, thankful my cotillion days when ascending those stairs to the ballroom above were over.

The smell of clam chowder from the Tale of the Whale restaurant would engulf me and with a quick wave and hello to the hostess, I would continue across the original wood-planked floor and into the tiny old-fashioned candy shop, where I would put on my apron and begin my shift: scooping candy for customers out of jars, weighing the salt water taffy, making change, dusting shelves.

Since it’s opening in July of 1906, The Pavilion has been the site of approximately 28 types of activities, including a post office, art museum, bowling alley, gambling establishment, speed boat rides, fishing trips and live big-band music and dancing. The Pavilion is a California State Historic Landmark and listed in the National Register of Historic Places.

I was totally unaware that, as part of my little trek to work each shift, I was not only passing through a section of the city dripping with history, but I also was taking my place in our city’s story. One of the many voices that can tell everyone of the good ol’ days in Newport Beach.