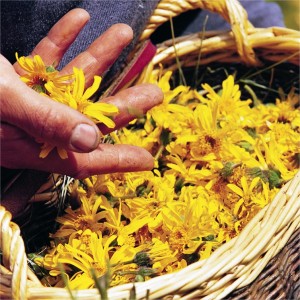 I’m happy that holiday shopping mayhem doesn’t occur in our part of the world.

Thanks to Jon Stewart and the like, I get to watch how the supposed masses take in the start of the holiday season with body slams, elbow jams, and punches. I do know I’ve had my own holiday mayhem simply from my own stupidity, such as turning sharply on a piece of ice with slick boots on, resulting in two cracked ribs and a squished tendon in my elbow.

It was a long time ago, yet I was lucky enough to be privy to what is very popular now in the form of alternative medicine.

Arnica montana, or just arnica, is a wonderful healing aid that helps the body reduce symptoms such as aches and pains, bruising, physical trauma, shock, and swelling. This little jewel in the healing world is perfect for any time of the year.

I bring it up today because it is the season to be filled with so many adventures in black and blue marks, tired muscles, and achy joints. People all over are running to the store to buy presents while in the midst of running to work to earn the money to buy the presents; then only to go running for exercise just to relax from it all. It’s all exhausting just to think about it.

Besides the heavy workout from engaging in the normal holiday run-arounds, there are the unexpected ouches that tend to happen.

Viewing the roof from the angle of the grass (at the base of the ladder that was previously climbed) certainly is the hard way to put up Christmas lights.

The tell-tale scream of a finger slammed in a car door while lecturing about car safety leaves everyone wincing.

The constant bumping into tables that weren’t there earlier; or the bang on the head after searching under a table that grew longer after going under it. And of course my all time favorite: a face plant into a car door after tripping on a concrete parking chock while walking and fumbling for keys.

It’s the season for mindless blunder and it’s best to be prepared with a little arnica to make it better.

A plant with pretty yellow flowers, arnica montana might be misunderstood since it contains the toxin helenalin (which is a potent anti-inflammatory agent). But it’s only poisonous if large amounts are ingested orally. Arnica is applied topically in a diluted form as gel, cream, oil or absorbed under the tongue in a homeopathic solution. Homeopathy might seem like a hoax to some, but already many people are benefiting from its uses, with arnica montana on top of the list. My recently acquired black eye (accident prone) healed nicely and quickly with the gel and the little homeopathic balls I absorbed sub-lingual.

Arnica works by providing an anti-inflammatory effect on tissues such as bruised skin or strained muscles and helps facilitate the movement of accumulated blood, fluid and decreases skin discoloration (less colorful bruises).

Muscle aches and pains are reduced as well. It also relieves pain from arthritis and rheumatism.

As with all remedies, finding the source of the problem is instrumental to healing. Many times repetitive motions, such as going up stairs, getting in and out of the car, twisting the wrong way, are culprits to aches and pains and need to be eliminated, reduced or modified so the body can heal.

And for this holiday season, being aware of body movements, slowing down to catch your breath as well as enjoying the wonderful holiday spirits will keep the aches and pains at bay.

But if a moment comes when that elusive coffee table moves an inch or two, or an open cupboard door appears out of nowhere, rub a little arnica on yourself to lessen the blow. You might even leave out a tube for Santa sitting besides his cookies and milk.