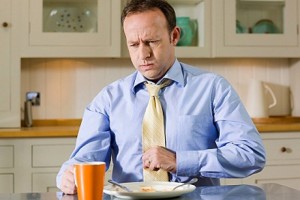 Sounds like some bad disease ready to knock over an immune system or two, but we’ve all suffered under its influence one time or another.

Dyspepsia, better known as indigestion, is not a disease, yet it is no laughing matter. The rumbling and grumbling of an upset stomach leaves no winners in this common ailment. Bloating, nausea and burping serve as the group of symptoms that indicates dyspepsia has struck. And any one of them leaves a person feeling less than perfect when it strikes. Despite the horrible feeling of a stomach doing a full 360 inside the body, what really is happening?

It is stomach acid coming into contact with the very sensitive lining (mucosa) of the digestive system. The acid breaks the mucosa down causing irritation and inflammation. Though indigestion can be caused by infection or some other digestive condition, it is usually a sign of eating too much, too fast, leaving the stomach churning and squirting its acid trying to break it all down into a liquid state called chyme. Then again, eating fatty or greasy foods, spicy foods, too much caffeine, too much alcohol, too much chocolate (noooooooo!), too many sodas also has its price of leaving the stomach wide open for revenge.

The list actually goes on to include smoking, antibiotics and NSAIDs (non-steroidal anti-inflammatory drugs), but for the majority of cases, it’s the “too much of” that rubs the tummy the wrong way for most of us.

The sound of “plop, plop, fizz, fizz” becomes music to the ears as this witches brew gives the stomach a temporary fix, but it also adds more chemicals to the mix: anhydrous citric acid (antacid), aspirin (pain reliever) and sodium bicarbonate (antacid). The irony being, aspirin burns a whole in the stomach lining which in a sense is exactly what one doesn’t want when indigestion is wrecking havoc.

Granted the anhydrous (without water) citric acid and sodium bicarbonate both have an alkalizing effect, so within time the stomach’s acid will tone down. But time is of the essence in the world we live in, so throw in some aspirin to bring immediate relieve by numbing the pain. Other antacids work the alkalizing effects by throwing in calcium carbonate and/or magnesium and aluminum hydroxide. And no, these are not good supplements for calcium or magnesium.

Don’t use those gut wrenching things. Throw out all the over-the-counter antacids, stomach relief medicine and acid neutralizing chews. Mother Nature can handle this one quite effectively. It’s not rocket science. Lemons have the highest citric acid (alkalizing) content of all citrus fruit. Yet it contains much more, giving it a holistic value for healing an upset stomach. For those indulging in gluttony of delicious foods, and we have all been lucky enough to partake in such a manner, squeeze a whole lemon in a cup of water and drink.

Sometimes, not often, there is not enough hydrochloric acid (stomach juice) working the food, so a little bit of raw apple cider vinegar does the trick to bring on the acid so the food can break down instead of sitting and putrefying in the stomach.

If the lemon juice doesn’t work, the apple cider vinegar should do the trick. Other stomach easing remedies include probiotics that lend the small intestines the appropriate bacteria so the food flows through its tubular structure with ease, thus allowing the stomach to release its newly chymed content instead of it sitting for hours in the belly causing bloat and at times heartburn.

Peppermint tea calms a tense stomach and improves bile flow from the liver to keep the food break-down process moving. Chewing on fennel seeds after a meal reduces intestinal gas, therefore relieving a coworker or spouse the effects of smelly smells. When we sit down to eat, it should be in a relaxed manner, leaving anger, frustration, and stress in the waste basket. Food should be chewed carefully, enjoying every sumptuous bite while gratitude for such a feast is in every forkful taken, indulging in taste, not quantity.