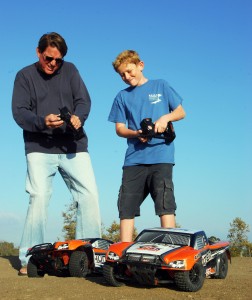 Once upon a time, just about every little boy built at least one model airplane. Kids knew the difference between a P-51 and a P-47. Airplanes were magic, and to fly in one was a huge deal. People would linger at the airport just to watch the planes take off and land.  Military pilots were like rock stars- heroic and larger than life.

Kids and adults flew radio control planes on the weekends at nearby parks. Hobby enthusiasts took up large amounts of space in their garages where they tinkered on Saturday mornings.

Radio control airplanes put food on my table, and a roof over my head. Our family business, Hobby People, has been dedicated to serving customers in the radio control industry for over 40 years.

But it’s a new world. Flying in a real plane is commonplace at best, usually a pain, definitely not magic. So model airplanes too have lost some thrill.

While there are still model airplane enthusiasts, today’s kids and grown ups are crazy for radio control cars, monster trucks, quads/drones, and helicopters.

Times have indeed changed. Kids are different, but not entirely. A child’s desire to spend time with a parent, their thirst for excitement and magic, will never wane.

Hobby People has had to adapt to and serve a new generation of technologically savvy customers. Yet, rather than a virtual experience on a screen, kids need the wind in their face, and the sun on their backs. Nothing replaces real tires kicking up real dirt and the buzzing of propellers on an ascending helicopter above the trees.

What looks like playing is actually learning. I’ve enjoyed watching our son Wyatt and my husband Matt spending time together with RC cars and helicopters. Wyatt is gaining knowledge about engineering, how motors, gears, and batteries work. The difference between amps and watts. True RC products encourage active, rather than passive play.

I hear them laughing just outside the front door. Racing cars in the street, or inviting neighbors to join them at the park. Ironically, there’s something old fashioned that remains in this high tech hobby.

The other old fashioned element is teaching our kids to fix, rather than throw away. A true RC product differs from a cheaper toy RC product in that you have the ability to fix and upgrade, or buy new parts.

Anything you can do to a real car, you can do to these RC  cars, from getting new tires, or a faster engine, to changing the gearing or the suspension.

That is what makes it a hobby rather than a toy.

In every grown man, there exists a boy, wanting to make his RC car go faster or helicopter fly higher.

Chances are Dad won’t want to share; I suggest putting two on your list. And come on over to our house for a race!

For more information go to HobbyPeople.net.