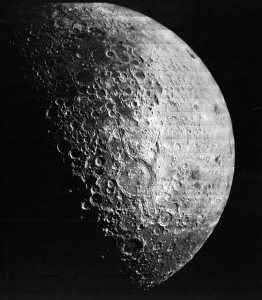 The cow jumped over it, we say goodnight to it, when its full werewolves howl at it.  In its absence, the oceans and seas would loose the ebb and flow of their tides.

It’s the moon of course, and since the beginning of time, humans have had a fascination with the big swirly magic ball in the sky.

In 1969, the world watched in disbelief as man landed on the moon. Mainly the disbelief stemmed from the confirmation that the Earth’s only natural satellite isn’t made of blue cheese.  In fact, the moon is a desolate, harsh place, It’s made of rock, and the powdery grey silt is pretty monotonous.

The landing gave mothers everywhere a new precedent for motivating their kids.  “Hey junior! You can finish cleaning out the garage, come on, they put a man on the moon, this is easy!”

Or, “If they can put a man on the moon, you can write your research project on methane gas.”

With the moon landing, the bar was raised for kids everywhere.

But kids are kids. Most are smart enough to be jumping on their trampoline in the backyard, putting off homework as long as possible. Especially when a heavy golden moon is drooping so low, that if you jump high enough and stretch long enough, you could touch it with your pointer finger.

Over forty years after the Eagle has landed, our love affair with the moon has not waned.  Regardless of the barren and lonely landscape, there is still great magic in that swirly ball in the sky. We can still believe.  The moon continues to be the subject of storybooks, nursery rhymes, and scores of songs.

In one of my favorite scenes in, “It’s a Wonderful Life,” George says to Mary “What is it you want, Mary? What do you want? You want the moon? Just say the word and I’ll throw a lasso around it and pull it down. Hey. That’s a pretty good idea. I’ll give you the moon, Mary.”

I watch that movie every December and still get chicken skin during that scene. It’s the most romantic thing a guy can say to his gal.

I think of my Grandma Sylvia whenever I say, “There’s a ring around the moon, that means rain.” I hear her voice in mine. I say it just the way she used to say it. I still feel the excitement of the enchanted weather prediction secret.

Just like everything in life, it’s all in how you look at it. A simple test – how one views the moon will tell you how much gravitational pull to happiness exists in their lives.

Do you see the moon as nothing more than rocky, barren and harsh place, hardly worth a glance upward? Or, do you see magic, brightness, endless possibilities, and…. yes…blue cheese?