Newport Beach boat builder Dennis Holland had a deadline looming this week—a deadline imposed by a court appointed receiver to insure an agreement reached between Holland and the city of Newport Beach earlier this year was carried out to the satisfaction of a Orange County Superior Court judge overseeing the case.

That agreement calls for the disassembly and clean-up of debris from a 100-year-old boat called Shawnee, which has been sitting in the side yard of Holland’s house on Holiday Road in Newport Beach. 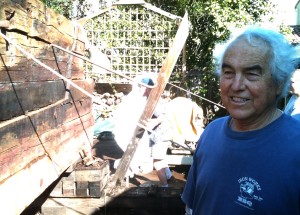 Holland has been restoring the ship on his property since 2006. Although legal when the project began, the city later sued Holland for violating an ordinance it passed it 2009 that made Holland’s project illegal.

The latest deadline imposed on Holland was Christmas Day.

Despite Holland’s best efforts to complete the task on his own, the work was still only partially completed as of a few days ago. Recent rain, a bout with the flu, and Holland’s ongoing battle with cancer were all factors in the cleanup delay.

Late Friday, the receiver, Mark Adams, of Los Angeles based California Receivership Group LLC, paid Holland a visit at his Newport Beach home to inspect the progress of the cleanup. Adams, who had previously been to the property on multiple occasions to work out a schedule and details of the cleanup with Holland, was not happy with what he saw.

The Independent had been invited to sit in on those previous meetings between Holland and Adams, although it was not present last Friday. Adams spoke with the Independent three days before Christmas and said he was not happy with the pace of the cleanup.

“He (Holland) was not as far along as I expected him to be. I understand that he’s had the flu and there were rain days,” said Adams. “But he’s also had 30 days since we reached our agreement and is about 50 percent done with what he agreed to do.” Adams stated that if Holland couldn’t meet the deadline, Adams would have to step in and have the cleanup completed as agreed.

With a deadline fast approaching and Holland unable to meet it by himself despite his best efforts, Holland’s family and friends 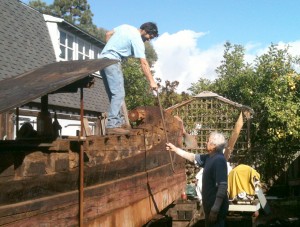 rallied around the boat builder to assist in the cleanup.

Led by his son, Dennis Holland Jr. – an experienced boat builder in his own right – a crew of young and old family and friends began the massive undertaking on December 23.

Most of the 72-foot ship’s large boat frames were removed and saved for later restoration (the agreement between Holland and the city allows for the restoration to continue as long as it complies with all applicable laws). Wood debris was discarded and pieces of the ship crucial to its restoration were stacked, stored and organized. Still, a large portion of the work remained to be completed the next day.

Despite a steady rain on December 24 that didn’t clear until later that morning, a crew of at least a half a dozen workers continued the task and didn’t stop until the yard was clean and clear.

As the day wore on, some of Holland’s friends departed to attend to their own family duties on Christmas Eve. Later in the afternoon, the Independent paid another visit to the Holland property to check on the cleanup progress. The senior Holland was still at work sweeping off his driveway, while his son was tossing one last trashcan loaded with debris into a dumpster.

To the untrained eye, the job clearly looked done—done right, and on time. The area was clean, organized and the exact opposite of what it was only hours before. 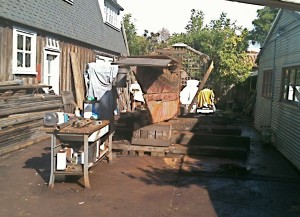 On December 22, Adams had noted that if Holland didn’t meet the Christmas Day deadline, “I’m going to bring someone down next week to give me an estimate on the cost of complying with the first deadline and intend to authorize them to start work late next week or early the next.”

Holland told the Independent late Christmas Eve that he believes “that will not be necessary now.” Adams is expected to once again come to Holland’s home to inspect the cleanup and decide for himself if that is the case.

For now, though, it appears that it’s going to be a Merry Christmas for Mr. Holland and his boat opus.