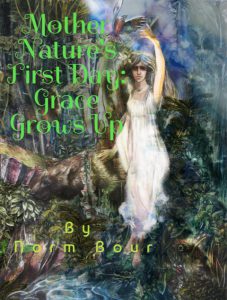 “The time is right for people to know that the world is much bigger than ourselves, and if we do not take care of our planet, Mother Nature will throw water on us to wake us up,” said author and world traveler Norm Bour.

Norm is a familiar name to Newport Beach Independent readers. For several years, he wrote everything from business stories to travel to interviews with local entrepreneurs.

Now, Norm has finished his first work of fiction: “Mother Nature’s First Day: Grace Grows Up.” He feels its message is very timely.

“I think it’s a good fable, myth, and fairy tale that kids will learn from and adults will enjoy,” he said. “COVID is a tough love way to slow us down and appreciate life and what we have. This is not the first time we have been taught these lessons. As I saw the world slow down and nature and animals take back what man took away from them, I wondered if this was part of a plan. I wondered just who is Mother Nature, how did she get so smart, and is this her first effort to teach us?”

Norm explained that the story follows Grace, the teen heroine, as she learns from her mother, the “original Mother Nature,” and her own experiences as she grows up wrestling with feelings of unworthiness and fear like everybody sometimes  feels. She eventually learns that her Father God created the world where everybody did their part and didn’t sabotage or jeopardize the planet. One of Grace’s discoveries is that it’s up to her to help the planet.

“I have lived my life in Faith and believe in a universal spirit which touches us all,” said Norm. “This book came as an inspiration, and I wrote a short story which expanded to become a book, which literally poured from my fingers.”

Norm describes himself as a traveling nomad, a curious Baby Boomer, and a man who lives in Faith hoping to inspire travelers and dreamers.

Norm left the United States in February of 2019 and has traveled the world ever since then, usually staying six weeks at a time in different locations. He has traveled to 23 countries and over 400 cities.  He was in Thailand when COVID struck, and barely made it back to the United States for a friend’s wedding before border crossings closed. Home base is now Puerto Morelos in Mexico.

He appreciates all that traveling has taught him.

“Every country has its political dissention, sometimes outspoken, sometimes concealed,” he said. “The world does NOT revolve around the United States!  History outside the U.S. is on a grander scale. In our country, a house or landmark a few hundred years old is considered old, but I stayed in a 500-year-old house in Tivoli, Italy, and the town was founded 1200 years before Christ, and 500 years before Rome. It’s mind-blowing.”

Norm enjoyed his six years writing for the Newport Beach Independent where he covered business and entrepreneurship along with some travel, entertainment, and charity events.

“I loved being an insider, knowing what and who and how things were going on in town,” he said. “Politics and such were not my scene, so I left that to those that like it. I’ve always been a bit outside the box, always looking for different and unique spins.”

“Mother Nature’s First Day: Grace Grows Up” may be Norm’s first work of fiction, but it’s not his last.

“I never had the confidence to write a fiction book until now, but I have several more outlined and will pursue them too,” he said.

To learn more about “Mother Nature’s First Day: Grace Grows Up” and Norm’s many travels, email him at [email protected].

To order a hard copy and an e-book copy of “Mother Nature’s First Day”, visit