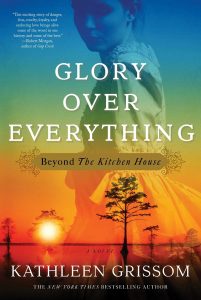 “I looked at my hands to see if I was the same person now I was free. There was such a glory over everything. The sun came up like gold through the trees, and I felt like I was in heaven.”

These words were uttered by Harriet Tubman, famous conductor on the Underground Railroad, upon attaining her freedom from slavery. Even now, generations later, I can’t possibly read these words without having them stir my soul. That first breath, taken free of being regarded as another person’s property, must have indeed tasted like a small slice of heaven, despite the uncertain future that lied ahead.

It is from this quotation that the new novel by Kathleen Grissom, and Under Cover Book Club selection for June, “Glory Over Everything:  Beyond the Kitchen House,” takes its title.

Readers will remember Grissom for her previous novel, “The Kitchen House,” which chronicled the lives of the slaves who called the Tall Oakes plantation in Virginia home.

Originally from Canada, Grissom moved to a farm in Virginia with her American husband, after outgrowing their modest farm in New Jersey. When researching the history of the area, she noticed a spot on an old map that was marked as “Negro Hill.” This notation stuck with her, and she was set on a journey to discover what significance that land held in the history of her new home.

After having done a fair amount of research, she was told by local historians that the area was likely the site of “a

tragedy.” One day, after learning this information, a story sprang to her mind while doing her daily journaling that would eventually become the tale told in “The Kitchen House.”

Grissom has said that her characters come to her fully formed, and that the storylines play out in her mind, almost like a movie. She says the only time the story slows is when the characters lead her to a place or event that she has not yet researched. Thus, she is an impeccable researcher, making sure that she possesses the knowledge necessary to accurately tell the story the characters bring her to.

Now, the story continues in “Glory Over Everything.” While it is a stand-alone novel, readers would benefit from having first read “The Kitchen House,” in that they would have the background history of the main character Jamie, and how he became the man he is in this book.

Born to a slave mother, Belle, and her master, Marshall, Jamie ultimately runs away from Tall Oakes, and at the outset of “Glory Over Everything,” he is living as James Burton, and passing as a white silversmith in Philadelphia society. Despite having escaped his slave heritage, he is living under the constant fear of his secret being discovered.

At the same time a series of events is unfolding that threatens to expose him, a servant boy, Pan is captured and sold into slavery. On account of an old debt he owes to Pan’s father, James agrees to travel down south and attempt to rescue the young boy.

His endeavors will bring him dangerously close to the plantation where slave hunters still yearn to return him to his “rightful” place. As a result, both James and Pan find themselves on a dangerous path that will bring them back into contact with characters from the first book, as well as lead them on a dangerous journey through the Great Dismal Swamp via the Underground Railroad, in a quest to regain their freedom.

Grissom has once again proven her ability to write a work of historical fiction, whose vivid characters bring to life an era from our nation’s troubled past.