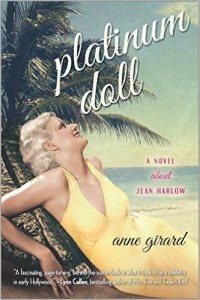 During an evening brainstorming session in which “no subject talked to me,” Haeger’s 23-year-old daughter, Elizabeth, suggested Jean Harlow after a Google search of famous people, including Marilyn Monroe.

Upon initial research, Haeger discovered that “Harlow was much deeper as a young woman than the stylized pictures that we see today would suggest; she was well-read and well-educated. I liked the idea that she eloped with her boyfriend at age 16, and had the most stereotypical stage mother you can imagine. Her mom tried everything in her power to break up the marriage.”

“The book is a portrait of a fragile marriage,” Haeger stated, made ever more so by the effort required to become an actress in early tinsel town.

Harlow packed a lot into her 26 years, said Haeger, including three marriages and an affair with leading man William 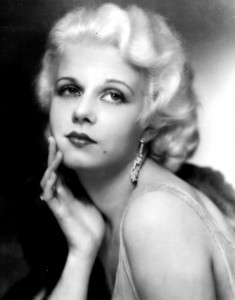 Powell. She died from the effects of scarlet fever and kidney failure, perhaps the latter brought on by the fast life within a fast industry.

Complex personalities and interactions, such as Harlow’s, cast the foundation for Haeger’s favorite structure, the historical novel.

Once Haeger chooses her subject, the in-depth research begins, an investment in both time and dollars that often lasts several months, during which she determines “if a book is really there.”

During that process, Haeger consistently asks herself if she can take the facts and weave them into a “fresh or compelling” story.

Writing a historical novel is like walking a tightrope, Haeger equated: “I try really hard not to go outside of fact during a fictional scene. It’s important to me to be historically accurate, because I want readers to know as much about a person as possible.”

When there is probability of factual conflict, Haeger documents her research in the author’s notes.

“I always feel comfortable that facts are accurate because of the exhaustive research that I do, but you’ll always find a reader who challenges your facts.”

Although initial investigation may start superficially with a review of existing biographies, Haeger — a UCLA grad with a BA in English Literature, and a MA in Clinical Psychology from Pepperdine University – and her husband, Ken, travel around the world for on-location and in-depth historical investigation.

“Most of my books are set in Europe,” Haeger said. “’Platinum Doll’ is something of a departure for me.”

Over the past 25 years, publishing giants such as Random House, Simon & Shuster, Mira (part of Harper Collins) and St. Martin’s Press have released Haeger’s creations throughout the world. They have been translated into 18 languages.

Most authors will acknowledge loneliness during the writing process, although many admit to being introverts whose closest relationship is with their typewriters.

But in the end, writing a novel becomes a “team effort.” First, Haeger rewrites her manuscript at least three times before showing it to anybody. Then her agent gets a crack at it, and then a general editor gives it a once over, inevitably making more suggestions for “improvement.”

If those changes are accepted (and sometimes, writer argues with editor to save that word, phrase or paragraph), the manuscript is submitted to a line editor, followed by a proofreading editor.

“Once it’s published, I never read the book again,” Haeger admitted, for she’s already onto the next project. This spring, Haeger returns to Europe to research another historical novel that “goes far back into European history.”

Haeger recommends that would-be writers “follow your heart. If you have a story to tell, absolutely tell it. Do the research, learn how the publishing industry works, attend seminars, and follow the advice of other published authors.”

Quoting Winston Churchill, she admonished writers to “Never, never, never give up.”  Haeger also cited one other advantage to being immersed in the manuscript: “Writing keeps me from shopping.”

“Platinum Doll” is available at bookstores and from Amazon.com. One reader review posted on Amazon: “A terrific read for anyone who enjoys historical fiction as you’ll be transported to the glitz and glamour of Hollywood in the roaring 1920s.”

On Sat., Feb. 27, at 1 p.m., Haeger, along with two other authors who’ve written Hollywood-themed books, will read excerpts from their works at Seaside Gallery, 124 Tustin Ave., in Newport Beach.