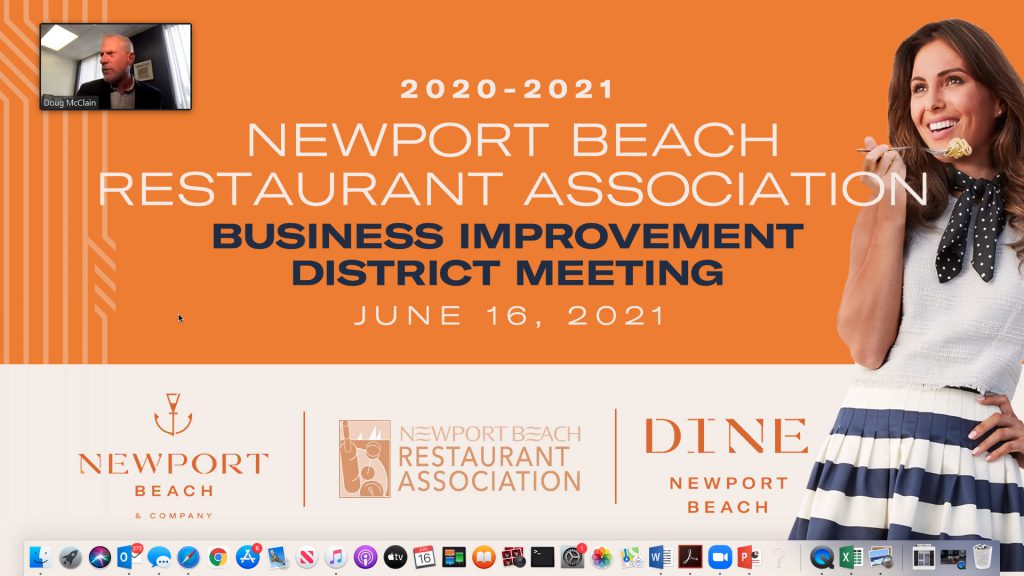 After more than 25 years of service, the Newport Beach Restaurant Association Business Improvement District (BID) has officially been dissolved.

It was an unexpected end to what had been a noteworthy association that was created for the purpose of financing activities and programs such as Restaurant Week to benefit its member businesses, which encompassed any food-service business within the city’s boundaries.

The chain of events that lead to the dissolution of the Restaurant BID started at the Newport Beach City Council meeting on May 11. The annual renewal of the Restaurant Association’s BID was on the Council’s consent calendar.

City Attorney Aaron Harp asked the City Council if they wanted the city to return with a resolution to disestablish the Restaurant Association BID.

“I guess so,” replied O’Neill.

“That’s the first time an item has failed on Consent without being pulled since I have been on council,” noted Muldoon.

Godinez noted in his email that “if passed to officially disestablish the NBRA on May 25, the association will be dissolved immediately which means no more Restaurant Week, no more year-round marketing and no more Dine Newport Beach.”

Godinez added that “the Newport Beach Restaurant Association is vital to the fabric of our culinary community. This is the worst possible time to lose all citywide marketing and restaurant-industry advocacy as we are moving toward recovery.”

The restaurant owners all spoke in favor of keeping the Restaurant Association BID another year, and that they believed the Association was beneficial to the Newport Beach restaurant industry.

Rosansky told the City Council that the Restaurant Association was very effective in marketing the restaurants in town.

“It contributes a huge amount to the general fund budget, restaurateurs have donated food to charities and organizations, to the police and fire departments. These people are always giving back to the community. It’s the ideal public/private partnership.”

Sherwin told the City Council that restaurants face tremendous challenges as they emerge from the financial crisis cause by the pandemic. He also mentioned that the Council wanted the Restaurant Association to convert from the 1989 BID law they were formed under to the 1994 BID law, which has different structural rules and assessment procedures.

“The organization has agreed to start a strategic planning process that could begin the dialogue on the conversion as well as several other issues,” said Sherwin, whose Newport Beach & Co. organization helps the Restaurant Association promote its activities. “Should the BID be renewed for another year, we will encourage the BID to pursue this conversion path.”

Councilmember Dixon made a motion to retain the NBRA BID for one year, and during that time have the Restaurant BID reform itself under the 1994 BID law.

“This whole issue came about when the council members decided not to support the continuation,” stated Dixon. “It had no public discussions, the business owners are emerging out of COVID, and then we’re throwing this on top of it. It’s punitive, it seems unnecessary, it seems cruel, and I would like to give them 12 months to establish themselves in the formation and conversion of a new structured organization that we have all wanted them to go into with the 1994 law.”

“It is neither punitive nor cruel,” replied Councilmember O’Neill, adding that there have been many discussions on the dais over the past several years about the Restaurant BID converting to the 1994 law, and they have failed to do so.

The Council debated the dissolution topic for nearly an hour. The discussion at times got heated, with pros and cons being voiced. Additional public comments from restaurant owners were heard, most in favor of keeping the Restaurant BID.

Because of the tie vote, the Restaurant BID was essentially in limbo, said City Attorney Harp.

An emergency meeting of the Restaurant BID was called on June 16, during which board president Godinez told the board that because they were in limbo, there will be no board and they needed a plan on how to use the BID assets.

Newport Beach & Co. Senior Vice President Doug McClain told the group that “we can continue the NBRA in some sort of capacity, so it does not have to completely dissolve.”

With net assets of $122,035.27, McClain said the association had three options: Equally distribute the assets back to approximately 270 BID members, have Newport Beach & Co. use $40,000 of those assets to market another Restaurant Week in January and return the balance to the member restaurants, or direct Newport Beach & Co. to use the entire amount to execute the board’s already approved marketing plan to promote the restaurants for another year.

“These are options we have come up with in partnership with the city of Newport Beach,” said McClain.

After a lively discussion between board members, a vote was taken. The majority voted for Option 1—to return the money to the members.

A second motion to give the Restaurant BID intellectual assets to the city was also approved.

“Thank you everyone for you time and effort, I’m sure we’ll see each other down the road,” said Godinez. “Meeting is adjourned.”

In an email to the NB Indy following the meeting, Godinez said the BID Board was concerned that restructuring and converting to a BID under the 1994 law meant the organization would become a 501-c entity, which operates autonomously outside the city but still has certain privileges. The Board was also deeply concerned about 94 law assessment collections process, which differed from the 1989 law under which the Restaurant BID had been formed.

Godinez also noted that he felt the Restaurant Association BID board was in some ways becoming stagnant and that some saw the board as being ceremonial and not productive.

“In all, the general consensus of the board was that we need more participation from local restaurateurs and operators, and the BID may not be the best forum to invite creativity and participation,” wrote Godinez. “The hope is a merchants association emerges from the ashes of the dissolved bid. The association would focus on real time issues for restaurants, design a new strategy for marketing Newport Beach restaurants, and create a more inviting environment in which hospitality professionals can express ideas, come with concerns, and discuss a collective goal for our city’s restaurants.”