Newport Beach residents heard from a different set of candidates this week during a community meeting.

The event highlighted the difference in style between the two candidates.

The challenger, Spitzer, was animated and held up newspapers to emphasize his points. Once saying he would “whisper” because he felt he was yelling. Passionate about the position, Spitzer highlighted a number of changes he wants to make in the office.

“If you haven’t figured it out, I’ve got a hell of a lot of energy,” Spitzer said, eliciting laughter from the audience.

Rackauckas was even-toned and conversational. He touted his record and endorsements. Rather than focus on the things that need to be fixed, Rackauckas noted that things are going well in his department and he’d like to continue that.

“Things are going well in the DA’s office,” Rackauckas said. “This is a high integrity office.”

They seemed to disagree on the current crime trends and environment in OC.

Crime is up 25 percent in Orange County, according to Spitzer.

Spitzer argued that, between 2008 to 2016, only 62 percent of felony cases in the county resulted in felony convictions. The low number is at least partially due to the high number of plea bargains made, he added.

“Police can work all day long, they can arrest people all day long, but if the prosecutors are not doing their job, we’ve got a serious, serious problem,” Spitzer said.

Rackauckas pointed out that gang violence is significantly lower than it has been in decades.

“We have half the number of gang members in this county than we did 20 years ago when I took office,” Rackauckas said.

The current OCDA mentioned different programs that work to combat the local gangs, including Orange County Gang Rehabilitation and Intervention Partnerships. Through GRIP, they are educating parents to lead their children away from gangs and incentivizing children by offering an alternative to joining gangs, Rackauckas explained.

Rackauckas said the GRIP program is a key part of the effort to reduce gang crime. It has had a lot of positive results, he added.

Rackauckas also commented that crime is lower in Orange County than any surrounding county. 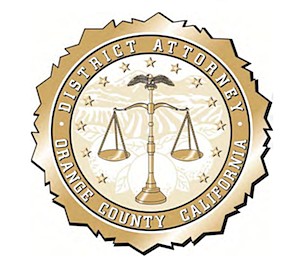 He also mentioned the local DNA database, dealing with sober living homes, and his office’s efforts to fight human trafficking.

A topic both candidates touched on is a top issue in Newport Beach: Homelessness.

There are a lot of different groups of people within the homeless population, Rackauckas explained.

Efforts from local agencies only work if they want to help themselves, Spitzer said.

“We have a duty to help others,” Spitzer said. “We’re all in this together, we’ve got to solve homelessness.”

As far as the mentally ill people on the street, Spitzer said he wants to expand collaborative court, which combines judicial supervision with community mental health treatment and other support services.

In order to make any improvements to the issue some “serious changes” in the law need to be made, Rackauckas said.

There are also some recent issues that have made the problem worse, he said, citing Proposition 47, which involves reduced penalties for certain crimes. People who were previously facing stiffer narcotic charges were getting treatment, Rackauckas explained, but now, facing lighter sentences, are “fleeing” the treatment centers.

“We have to reverse that law,” Rackauckas stated.

Rackauckas, along with other California district attorneys, is currently working on an effort to fight Prop 47. It will be on the ballot in 2020, he noted.

“I don’t see how we’re going to get control of the problem without some law that’s a little easier than 5150 to get people treatment involuntarily,” Rackauckas said, admitting that it will be a divisive issue, but it’s something he thinks is necessary.

The forum, which featured each candidate speaking separately, with neither in the room when the other spoke, included some accusations and complaints from both about their opponent.

Spitzer cited cases like the Seal Beach shooting, where Rackauckas was removed from the case following a ruling about improperly withholding evidence from the defense. The judge later ruled that the suspect was ineligible to receive the death penalty due to the prosecutorial misconduct in the case.

“These are the headlines you get as the citizens of Orange County,” Spitzer exclaimed. “People are dying in the streets because we’re not serious about crime in Orange County.”

Spitzer had a lot of specific criticisms of the current OCDA.

Rackauckas noted that a lot of what Spitzer is doing is “running me down” and “trashing me, in a major way,” he said.

Spitzer has wanted this position for a long time, Rackauckas claimed. He didn’t do that well when he was in the OCDA office the first time (when he served as a deputy DA and assistant DA), Rackauckas added.

There’s not a lot of trust of Spitzer among the deputy DAs, Rackauckas said.

“I think he would have a tough time,” Rackauckas added.