Lido Bottle Works opened in June of 2017 with great fanfare in Lido Marina Village, with Chef Joel Harrington at the helm. He moved out of state to pursue new opportunities in March, 2018, with Chef Amy Lebrun, who served as the Lido Bottle Works executive sous chef since the restaurant opened, taking over as Chef. She brought her hyper-seasonal cooking style to Lido Bottle Works and brought newfound recognition to the r3estaurant, and to herself—she was nominated for Chef of the Year at the OLC Restaurant Association’s Golden Foodie Awards in 2019.

Word came this month that Chef Lebrun had moved on, this time to become Culinary Director & Executive Chef for Fermentation Farm. According to the Fermentation Farm Facebook page, she will run three in-house kitchens operating under the Fermentation Farm banner: the Hot Bar, Cold Fermenting Kitchen, and Broth & Kombucha Kitchen. She will also overhaul the menu at the new Costa Mesa restaurant, which debuted in December as part of a recent remodel and expansion.

Once classes and gatherings can resume according to COVID-19 protocols, Fermentation Farm is planning chef dinners, and cooking classes for the public and for chefs. Chef Lebrun will be offering make-at-home meal kits from the items at Fermentation Farm, and will launch her own line of food products that will be sold at Fermentation Farm.

But back to Lido Bottle Works.

According to press material, Gutierrez reflects the restaurant’s hyper-seasonal style of cuisine, and will continue with the restaurant’s commitment to seasonal food with perfectly-paired local craft beers and California wines.

It wasn’t that long ago that Gutierrez was studying at Orange Coast College to transfer as a Bio-Med major while simultaneously working as a server at a Corona del Mar retirement community. Seeing that the cooks made more money, he joined the kitchen crew.

During his last few months at OCC, he took a job as a line cook at Crow Bar & Kitchen (now CdM Restaurant). Inspired by their chef Johnny Shaw, he left school to cook full time. Gutierrez worked for five years at Crow Bar, and then Crow Burger. He transitioned to Filomena’s Italian Kitchen in Costa Mesa for a year, then took a year off to play professional poker.

After a year, he returned to Crow Bar as Sous Chef before leaving in late 2015 to become Sous Chef at SeaSalt, a Santa Maria-style BBQ and burger joint formerly in Huntington Beach. He was promoted in 2017 to Chef de Cuisine, writing the menu and doing wine dinners at SeaLegs, the concept’s sister restaurant. He joined Lido Bottle Works in 2018.

“I came because of original Chef Joel Harrington’s food. I worked with him for a year. He was a rising star, and I thought it would be beneficial to learn from someone like him.” Gutierrez said. “When Chef Amy Lebrun became Executive Chef, I became her Sous Chef.”

Chef Gutierrez said that “the idea of being super local and super seasonal enabled me to hone my food voice. It was pretty big for me to witness the love and care that farmers and purveyors put into their product. I wanted to continue that same vision onto every plate of food.”

Chef Gutierrez is adding a couple of new dishes to the menu, but the big change will come when he introduces a spring menu that he says will highlight “proteins we haven’t used here before, handmade pasta and seasonal produce.”

According to Chef Gutierrez, “it’s always been my end goal to be an executive chef, and to be able to present my food through my own voice. It’s a great opportunity and I think I couldn’t be at a better restaurant to do so.”

National Margarita Day is on Monday, Feb. 22 and SOL Mexican Cocina is embracing the spirited occasion with a variety of specialty margaritas made from a carefully curated collection of over 100 of Mexico’s finest small-batch tequilas and mezcals, including signature single-barrels. 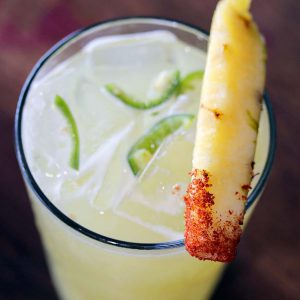 SOL also has classics such as the Cadillac Margarita (an excellent drink) and an Organic Slim Margarita. SOL also offers a Casa Noble SOL Single Barrel Margarita, which is made with SOL’s private label single barrel Casa Noble Reposado, served house or skinny style. I’ve had both, and they’re equally as tasty.

SOL has a happy hour from 3 to 6 p.m. on National Margarita Day with $7 house margaritas, $8 skinny margaritas, and $9 Watermelon Margaritas, along with a variety bites including Grilled Sweet Corn (a tasty treat), Naked Guacamole, Street Tacos (so good), Hot & Raw Ceviche, and other south-of-the-border delights.

Hopdoddy Burger Bar in Fashion Island is know for – what else – custom burgers, and craft beer.

This weekend, they’ll also be know for margaritas. In celebration of National Margarita Day (Feb. 22), Hopdoddy is offering special margaritas go to Feb. 20-22.

You can go big with Hopdoddy batched, to-go margaritas for just $20 each (normally $29.95). The Rocks is a 32-ounce bottle of the brand’s signature Doble Fina Margarita, and The Roadie is a half-gallon bag of the House Frozen Margarita.

Or go small with one of Hopdoddy’s single-serving margarita variations for just $5 and enjoy in-person or at home.

For more information and to order online, visit www.Hopdoddy.com. 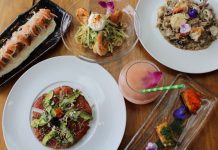 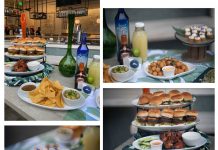