The Pacific Symphony has performed concerts in countries around the world, but this time it was symphony supporters who traveled to an exotic land during the Pacific Symphony’s 2016 gala, “Je t’aime Tahiti, Some Enchanted Evening,” held May 7 at Hotel Irvine.

We look forward to the symphony’s gala every year because whatever theme they choose for their annual soiree, it always exceeds expectations.

Such was the case with this year’s gala. Nearly 400 guests were

transported to a lush Tahitian paradise that began with a photo op featuring authentically-garbed models followed by Miss Tahiti 2014 handing out homemade, white-flower leis for guests to wear around their necks.

Once inside the ballroom, guests were enchanted by the lush landscaping which included large palm trees and white draperies offset by teal-blue lighting, giving the room an ocean ambience. The dazzling décor included tables adorned with centerpieces featuring birds-of-paradise flowers, foliage and candles.

During dinner, guests were entertained by a percussion quartet (performing on large

Pacific Symphony President John Forsyte welcomed attendees to the gala and thanked gala co-chairs Joann Leatherby and Ginny Davies. He noted that many of the symphony musicians were seated at gala tables, and that 20 percent of the Symphony’s annual budget comes from the gala. 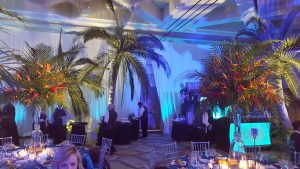 Kaufman was feted for his 25 year anniversary with Pacific Symphony (coincidentally on the occasion of his 21st wedding anniversary) with Forsyte, Daniels and Kaufman’s daughter, Whitney, offering anecdotes that exemplified his kindness and generosity.

“Whether conducting ‘Stars and Stripes Forever’ or music from ‘Star Wars,” your leadership of the Pops series has been 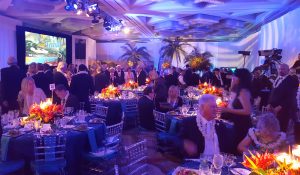 extraordinary,” said Forsyte when introducing Kaufman. “Carl St.Clair said that one of the smartest things he’s done is appoint you Principal Pops Conductor.” 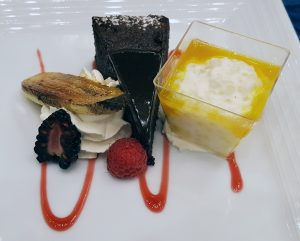 The evening netted $1.3 million for the Symphony’s artistic and education programs.