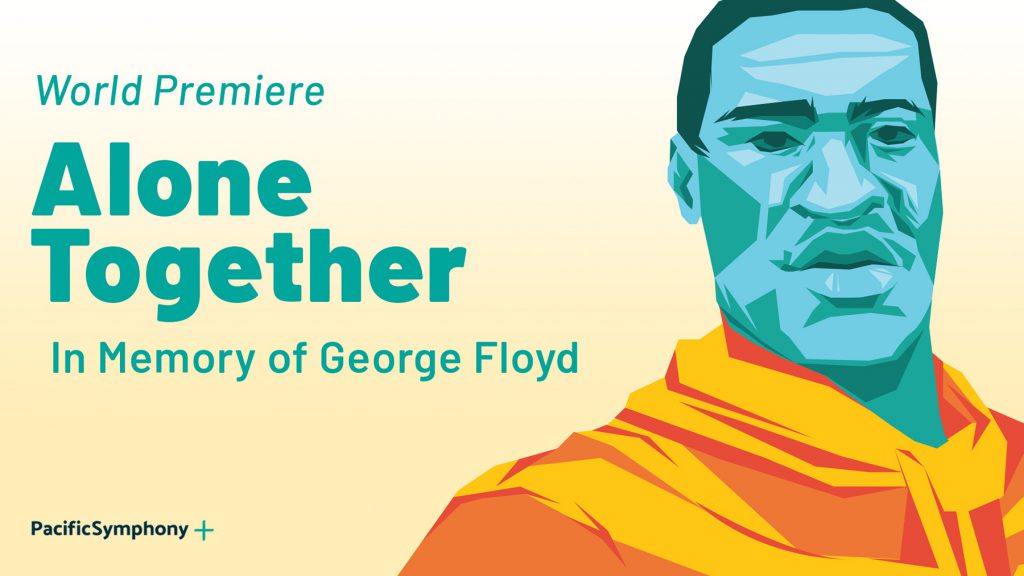 Pacific Symphony, in partnership with Fresno Philharmonic, Monterey Symphony and the San Jose Chamber Orchestra, commissioned Emmy Award-winning composer John Christopher Wineglass to write “Alone Together,” a piece that addresses the social issues we have all been facing during the pandemic, from not being able to perform together to systemic racial disparities.

Pacific Symphony will perform the world premiere online on May 25 at 7 p.m., the one-year anniversary of George Floyd’s death. The program will be available for free streaming on the orchestra’s YouTube and Facebook channels from May 25 through June 23.

“Alone Together,” which runs approximately nine minutes and features strings and percussion, will be performed again on May 27 as part of the Thursdays @ 7 online series. A joint statement from Wineglass and Fresno Philharmonic conductor Rei Hotoda explains the impetus and intent of the new work:

“’Alone Together’ addresses the social issues we are all facing during this pandemic—from not being able to perform together to even the systemic racial disparities given a world stage due to shelter-in-place. Despite all the setbacks of our present limitations, we are moving forward. This work is allowing us to continue our work as performers—to never lose sight of just how important the arts are and have always been. By creating this work, we are providing a way to connect to one another which is so valuable and something most of us probably once took for granted. We may feel alone at this moment but we as four performing arts organizations are coming to move forward together as one.”

The popular PacificSymphony+ streaming concerts continue through May. Each week, the Thursdays @ 7 online concert draws an average of over 3,000 viewers, which is more than the sold-out capacity of the Renée and Henry Segerstrom Concert Hall. Each week the chat rooms on YouTube and Facebook are buzzing with lively color commentary as listeners share thoughts and impressions.

PacificSymphony+ schedule for May:

FANFARE FOR THE UNCOMMON WOMAN

TOWER: Fanfare for the Uncommon Woman

Joan Tower’s six “Fanfares for the Uncommon Woman” are a tribute to “women who take risks and are adventurous,” with each one dedicated to an inspiring woman in music. The first of these short pieces was inspired by Copland’s “Fanfare for the Common Man” and is dedicated to conductor Marin Alsop. In Prokofiev’s first symphony, which he named “Classical Symphony,” he loosely imitates the style of Haydn.

From the Vault: Relive Pacific Symphony’s inspirational rendition of Italian composer Respighi’s richly colored symphonic tone poem, “Pines of Rome.” Conjuring up vivid images of ancient Rome, the piece achieved success at a time when opera dominated the music scene. Each of the four movements depicts pine trees around the ancient city in changing settings, including mysterious catacombs, children playing in the Borghese Garden, an ancient Roman temple and a soldier marching home triumphantly on Via Appia.

IN MEMORY OF GEORGE FLOYD

“Alone Together” by multiple EMMY award-winning composer John Christopher Wineglass addresses the social issues we have all been facing during the pandemic, from not being able to perform together to systemic racial disparities.

FANFARE FOR THE COMMON MAN

COPLAND:  Fanfare for the Common Man

Copland’s iconic “Fanfare for the Common Man” was one of 18 fanfares written by various American composers during the dark days of World War II to promote feelings of patriotism and national unity. Copland wanted to honor the common man who performed his deeds of heroism not on the battlefield but on the home front. “Alone Together” by multiple EMMY award-winning composer John Christopher Wineglass addresses the social issues we have all been facing during the pandemic, from not being able to perform together to systemic racial disparities.