Those are just some of the film scores composed by John Williams, without a doubt the most famous and prolific composer and conductor in the world.

Williams has been a guest conductor for countless symphonies, including our own Pacific Symphony. Now, Pacific Symphony honors Williams with the symphony’s first-ever virtual concert, “John Williams: Maestro of the Movies.”

This concert is available beginning on May 30, and will continue to be available on demand for 45 days.

This 45-minute online concert replaces the live Family Musical Morning series performance originally scheduled on May 30, and is perfect for all ages. The program is hosted by Associate Conductor Roger Kalia, and features music from some of John Williams’ most popular films, performed by Pacific Symphony and conducted by Richard Kaufman, who served as the Pacific Symphony’s principal Pops conductor for two decades. 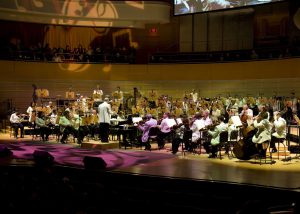 This virtual concert features a series of live-streamed introductory and explanatory clips from Maestros Kaufman and Kalia, along with footage of Kaufman conducting Williams’ music via pre-recorded footage.

Woven throughout the program are such features as “Ask the Composer with John Williams,” eyewitness accounts from Pacific Symphony musicians involved in the recording sessions for John Williams’ film scores, and an instrument spotlight focusing on the brass family.

Kaufman, who has known Williams for many years, discusses conducting John Williams’ music in concert and also shares entertaining anecdotes about the composer. In May 2015, Kaufman made his conducting debut with the Boston Pops, substituting for John Williams at the Annual Pops Film Night. The following year, Williams invited Kaufman to share the podium at the annual Tanglewood Film Night, and the duo shared the podium in concerts with the Chicago Symphony.

The concert concludes with a virtual “Passing of the Baton” from Kalia to the Symphony’s new Assistant Conductor, Jacob Sustaita.

The concert can be viewed by signing in with an email address at PacificSymphony.org/VirtualConcert. The program can be viewed on demand for 45 days after that.