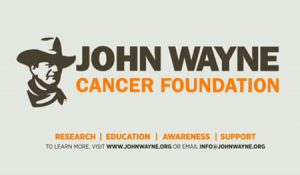 If you see a handful of people paddling in the ocean off the coast of southern California, don’t panic—they are part of the “SoCal PaddleDown for Cancer Relay,” a 250-mile ocean paddle that serves to promote skin cancer awareness and support “Block the Blaze,” a program funded by the John Wayne Cancer Foundation that educates nearly 75,000 youth and junior lifeguards each year about the dangers of sun exposure.  Executed solely by lifeguards from more than 25 agencies along the Southern California Coast, the relay began over Memorial Day weekend at El Refugio State Beach in Gaviota, and arrived at the shores of Will Rogers Beach in Pacific Palisades on July 11.

The paddleboard armada is continuing down the coast and will be passed off at its next checkpoint in Newport Beach in a few days before reaching its final destination at Imperial Beach in San Diego.

The SoCal PaddleDown Relay is a crusade to raise awareness for the John Wayne Cancer Foundation’s “Block the Blaze” skin cancer education program.  As the official partner of the California Surf Lifesaving Association, the goal of the program is to educate youth about sun safety and skin cancer – emphasizing skin cancer prevention and self-screening – and is geared to the Junior Lifeguard programs of Lifeguard and Marine Safety Agencies throughout California.

“As ocean lifeguards, we spend the majority of our careers in the sun and we know firsthand the dangers of sun exposure,” says Bill Humphreys, President of the California Surf Lifesaving Association. “Through the SoCal PaddleDown, the John Wayne Cancer Foundation is educating the next generation of lifeguards early in their careers on ways to detect skin cancer and prevent long term damage.”

Skin cancer is the most common cancer in the United States, with more than 3.6 million people diagnosed each year.

Lauren Fraga, Senior Program Director of JWCF, said “one in three Californians will be diagnosed with skin cancer during their lifetime, and these numbers are on the rise.  If it’s caught early and treated quickly, more than 95 percent of skin cancer cases can be cured – which is why educating our youth early-on about the dangers of sun damage is so vital to skin cancer prevention.” 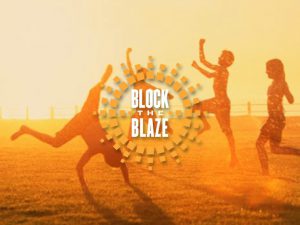 Block the Blaze has worked alongside the California Surf Lifesaving Association to provide proper skin cancer education to more than 100,000 Junior Lifeguards in California over the last six summers.

The program, now expanded into more than a dozen additional states, educates youth through in-person presentations, and in recent months through virtual Zoom webinars in order to maintain safe distancing measures.

Throughout the year, Block the Blaze travels to participating schools giving students longer, in-depth presentations that focus more on the science relating to skin cancer than those that are taught during summer.

Students learn the “5 Sun Safe Tips” to decrease their risk of developing skin cancer, along with the ABCDE’s of melanoma and how to go on “Mole Patrol” (self-screening) each month.

This is the 8th year the official “SoCal PaddleDown” has made its 250-mile trek down the coast to help raise awareness for skin cancer and support Block the Blaze.

To support this effort or to learn more about the program, please visit https://johnwayne.org/blocktheblaze.

Founded in 1985, the John Wayne Cancer Foundation was created in honor of John Wayne after his family promised to use his name to continue his fight against cancer. The John Wayne Cancer Foundation’s mission is to bring courage, strength and grit to the fight against cancer. JWCF funds novel and innovative programs, aligned with the priorities of research, education, awareness and support, JWCF improves cancer patient outcomes and achieves its mission.

Fight cancer with GRIT at www.johnwayne.org.