Brad Avery, Mike Wheeler, and Brad Stratton were all absent, but that didn’t stop attendees from getting the latest details on next month’s return of the Red Car.

Of course, only the spirit of the old Red Cars will be evoked. A shuttle-style bus like the ones used at The Beachcomber in Crystal Coves will run from a parking lot at Hoag Hospital to key destinations on the Balboa Peninsula starting June 17 on weekends only (plus July 4) throughout the summer months.

If the first year is a success, a traditional trolley-style car will permanently replace the shuttle buses for future use.

That familiar shade of trolley-red will grace not only the shuttles, but everything from streetlight pole banners to posters in merchant windows. Businesses and vacation rental agencies will start receiving promotional marketing for the trolley service soon in an effort to raise awareness and boost ridership in the first year of service.

Ads will run in local media, and Newport Beach TV will release a “nuts and bolts tour” of the trolley that will be filmed on June 5.

Visit Newport Beach is creating a website for the trolley that will highlight the route and attractions nearby each of the stops. Katy Dennis, Senior Director of Marketing & Strategic Partnerships for Visit Newport Beach, said that their website gets 100,000 hits a month, and that the trolley’s site will be featured prominently to boost awareness.

For the grand opening ceremony, which will take place on June 16 (the day before actual service begins), social media influencers will join the mayor and members of the city council for a ribbon-cutting at Balboa Village, Dennis revealed.

Breakfast and coffee will be served in a yet to be determined location within Balboa Village, then the trolley will take its first run, stopping at Newport Pier for a quick talk and photo op with Newport Beach lifeguards, and make a final stop at Lido Marina Village. The invitation-only trolley tour will feature local Carolyn Clark as the tour guide.

With thousands of followers on Instagram, Facebook, and Twitter, Dennis said the involvement of social media influencers will bring their message to an even broader audience. Dennis hopes Snapchat and Instagram filters will be available for the grand opening, and that everyone will tag their experience using the trolley.

The official route for the trolley is being finalized with the help of the Department of Public Works, Brenda Wisneski, Deputy Community Development Director for the city told the audience. “The stops may change to ensure efficiency and meet ridership needs,” she wrote in an email.

SIDEBAR: History of the Red Car

When the new trolley service starts June 17, the red vehicles will recall a bygone era of the Pacific Electric Red Cars that thundered up and down the coast in the early 1900s.

At the time, Newport Beach was becoming a well-known vacation destination, but news that the Red Car Line, an electric railway system that ran in Los Angeles and Orange Counties, was extending to the Newport area brought even more development. And people.

So many visitors were expected during the summer of 1906 that a new hotel was erected in 10 days to accommodate them. 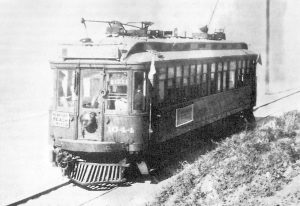 In the vast Los Angeles Pacific Electric network, Newport Beach was part of the Southern District and its southernmost stop. The entire network spanned as far north as San Fernando and as far east as San Bernardino County.

Orange County Red Cars flourished through the first half of the 20th century, but began to decline after World War II. Aging equipment and a steep decline in ridership forced the rail service to end in 1950.

One of the original Newport Beach Red Cars can be seen at the Orange Empire Railway Museum in Perris, California.