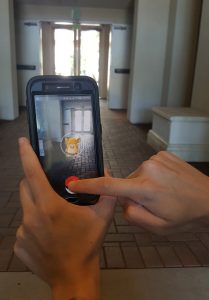 Monsters have taken over the streets of Newport Beach, along with hordes of people hoping to capture them—on their cell phones.

People young and old are playing Pokémon GO, an augmented reality game that challenges players to go out into the real world to search and battle virtual Pokémon characters.

Since its release on July 6, there have been 30 million downloads of the app onto phones and tablets, resulting in $35 million in revenue according to Niantic, Inc. the creator of the app.

So what is Pokémon GO?

According to the Pokémon website, Pokémon GO allows users to travel between the real world and the virtual world of Pokémon and discover Pokémon in a whole new world—your own. Pokémon GO is built on Niantic’s Real World Gaming Platform and uses use real locations to encourage players to search far and wide in the real world to discover Pokémon. Pokémon GO allows you to find and catch more than a hundred species of Pokémon as you explore your surroundings.

The website urges users to “get on your feet and step outside to find and catch wild Pokémon. Explore cities and towns around where you live and even around the globe to capture as many Pokémon as you can. As you move around, your smartphone will vibrate to let you know you’re near a Pokémon. Once you’ve encountered a Pokémon, take aim on your smartphone’s touch screen and throw a Poké Ball to catch it. Be careful when you try to catch it, or it might run away! Also look for Poké Stops located at interesting places, such as public art installations, historical markers, and monuments, where you can collect more Poké Balls and other items.”

Now that the game has been out for a couple of weeks, here are the most popular spots in Newport Beach to find Pokémon, Poke Stops and Pokémon Gyms (where team members congregate).

For those unfamiliar with the game this may sound Greek, but if you’ve got kids or grandkids, chances are they’re hooked on Pokémon GO.

Fashion Island: The expansive outdoor mall sports over 20 Poke Stops and several Pokémon Gyms for the opposing Mystic, Valor and Instinct teams to fight over. The stops often have lures activated which spawn more Pokémon than what a player can usually find roaming in areas without lures.

“My friends and I have a competition of who can level up fastest,” said Newport Beach resident Megan Pistacchi.

She comes to Fashion Island to capture rare Pokémon that she can’t find elsewhere.

“There are a lot of Pokémon here and I’ve caught some cool ones since getting here tonight,” said Pistacchi.

Sightings of Pidgeottos, Nidorinos and Parasects are some of the rarer Pokémon that appear at Fashion Island with a dappling of Vulpixes you won’t want to miss out on.

Balboa Island: The man-made 1.71 mile site is clustered with Poke Stops; five can be found on the Little Island, and the Big Island sports 32. The stream of lures used on the Poke Stops draw many rare Pokémon to the site including Bulbasaur, Charmanders and Squirtle. The placement of the Poke Stops so close to each other allows players to level quickly which will allow for them to encounter and captures stronger Pokémon during their journey.

Dover Shores: The water-front community overlooking the Back Bay has access to exclusive water-type Pokémon such as Kabuto and the elusive dragon-type Dratini.

“Dratini is one of the rarer Pokémon and is usually hard to find but it shows up here a lot,” said Newport Beach resident Jordan Khrone. He and his brother, Tommy, play the game with their friends and travel around Newport in an attempt to catch them all.

“We’ve caught a lot but there are still more to find,” said Khrone.

Newport Beach Civic Center: At the heart of city politics lies another hotbed for Pokémon enthusiasts. With many Poke Stops scattered across the grounds for collecting items, the biggest draw is the rare Pokémon Charmander that is available to capture.

“Once I have enough of the Charmanders I hope to evolve it into a Charizard,” said Khrone.

Crystal Cove State Park: The state park boasts a beautiful two mile walk along the coast which will net you rare water-type Pokémon including Horsea and Staryu with the occasional rare Seaking. The catch? There aren’t many Pokestops so be sure to stockpile your Pokeballs before hunting the creatures by the sea.

These spots will allow players to capture a wide variety of Pokémon so they can complete their Pokedex of 151 characters while also enjoying myriad areas and aspects of Newport Beach.