A special ceremony was held for the students to honor their “exceptional academic achievements and service to the community,” according to a press release.

“The Newport Beach Police Association is pleased to be able to recognize these outstanding young adults who have demonstrated outstanding character, leadership, and a commitment to serving their community,” the statement read.

Chavez attended Newport Harbor High School and was involved with the mentoring program as well as participating in sports. He is interested in law enforcement and has worked with police officer mentors over the past two years.

“He has an outstanding work ethic and possesses all the necessary character traits to make an outstanding police officer in the near future,” the statement from NBPA read.

Green was a NBPD Explorer captain and spent more than 900 hours serving the community. The police explorer program, post 1050, also awarded her with a $2,000 scholarship. She is planning on studying biology at the University of California, Los Angeles.

Hostetler and Naaseh served on CdMHS’s Associated Student Body, Hostetler as president and Naaseh as vice president. Together, the two organized the Every 1 Minutes DUI Awareness program at the school. 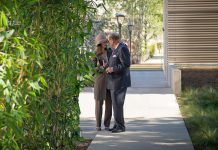