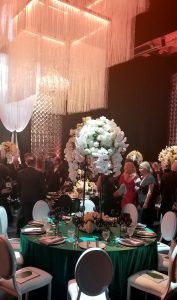 Segerstrom Center for the Arts kicked off the holiday charity season in style at the 45th Annual Candlelight Concert held on Friday evening, November 30.

The evening took on an “Enchanted Evening” theme thanks to an emerald-colored carpet that welcomed the 450 guests as they arrived.

Carols were sung by the Plaza Vista Middle School Choir as guests entered the reception, where they enjoyed a cheese and charcuterie display, champagne, wine and cocktails before proceeding into Segerstrom Hall.

Once inside, guests were welcomed by Candlelight Concert co-chairs Sandy Segerstrom Daniels and Jane Fujishige Yada, Center Chairman of the Board Mark Perry, and Segerstrom Center President Terry Dwyer.

Yazbeck opened the evening with “Pure Imagination” from the film “Willy Wonka and the Chocolate Factory,” and later sang and tap danced to “Almost Like Being in Love” from “Brigadoon.”

Egan included a medley of songs made famous by Judy Garland and one of her own signature pieces, “Maybe This Time,” from “Cabaret.”

Young offered songs from “Jersey Boys,” the show and score that brought him a Tony, an Oscar and a Grammy. Bell included his own hallmark song, “Ol’ Man River” from “Show Boat,” and “We Need A Little Christmas” from “Mame.” The CSFU Singers brought the concert to a rousing close with “Tonight” from “West Side Story” and “Aquarius” and “Let The Sunshine In” from “Hair.”

After the concert, the curtain was raised on the Segerstom Center stage, where guests dined at tables adorned with elaborate centerpieces and underneath shimmering chandeliers.

After dinner, the heat was turned up by the ultimate dance band, the legendary Earth, Wind and Fire, who performed hit after hit to the delight of the dancing guests.