People are learning more about the woman, the shark, and the attack, regarding an incident in Newport Beach waters last weekend.

The woman, Maria Korcsmaros, 52, professional fitness instructor and personal trainer from Corona, was “remarkably calm” after being bitten by what was likely a great white shark, officials said this week.

Korcsmaros, a married mother of three, is a longtime triathlete and completed an Iron Man competition in 2008. She was on a 1.5-mile “routine swim,” as  part of her training for a half Iron Man next month in Canada, said Jeff Corliss, a spokesman with Orange County Global Medical Center in Santa Ana.

Her family told officials that she was swimming about 500 feet off the coast along the buoys that define the safety swim zone, where athletes frequently train.

At approximately 4:15 p.m. Sunday, Newport Beach lifeguards patrolling the ocean off the coast of Corona del Mar State Beach responded to a female swimmer in distress.

“She was able to tread water and hold her own until help arrived,” said OCGMC Medical Director of Orthopedic Trauma Surgery Dr. Philip Rotter, who treated Korcsmaros. “That’s pretty remarkable.”

It appeared to be an animal bite wound, but lifeguards could not confirm it.

The lifeguards didn’t see a shark in the water, Korcsmaros didn’t tell the lifeguards that it was a shark, and there were no witnesses, said NB Lifeguard Chief Rob Williams.

“We treated it right from the beginning as a shark bite, but we didn’t want to come out and say it because we didn’t know,” Williams said.

On Monday afternoon, a spokesman for OC Global Medical Center confirmed that the wounds appeared to be consistent with a shark bite.

She had extensive, multiple lacerations extending in a half circle shape from her upper torso/right arm to her pelvis. She also sustained multiple broken ribs, lung injuries, chest wounds, and disruption of the abdominal wall.

“It’s very obviously a mouth, you can see individual marks from individual teeth,” Rotter said. “There are actually teeth marks down the back of the bone in her arm and also in her pelvis.”

The type of shark that bit her is still unknown, but is speculated to have been a great white.

“The tough part is that I’ve seen no physical evidence,” said Dr. Chris Lowe, director of the Shark Lab at California State University, Long Beach. “We’re trying to provide information just based on the description.”

It comes down to the size of the bite and the location of the incident.

It sounds like a fairly decent sized shark, he said, most likely a great white longer than 10 feet. They are the most likely species that is both found in the local waters during this time of year and most likely to bite a person, Lowe explained.

Other species of sharks are far more abundant in Southern California waters, but they either have smaller mouths or feed on other sources, he noted

Tiger sharks are capable of making a bite that size, but extremely rare in here during this time of year. Another possibility is a large mako shark, but it’s highly unlikely that a mako would be in that shallow of water. Hammerheads, which have been spotted around Newport Beach, tend to have smaller mouths and wouldn’t create a bite that big.

Korcsmaros didn’t even see the shark that bit her, Sauri noted.

“She wasn’t quite sure (what happened), just felt something hit her,” Sauri said, she described it as “very sudden.”

About 85 percent of people that are bitten by sharks don’t see it coming, Lowe said.

Sharks do take “test” bites if they‘re curious about something, but based on the description of the wound, the pressure the shark exerted was more than just a taste test, Lowe explained. But it is common for them to “bite and leave,” he added.

“She was very lucky that the lifeguards were right there,” Lowe said. “We don’t know what would have happened if she was on her own.”

Lifeguards rescued her from the water and she was transported to the trauma center at OCGMC in Santa Ana.

Doctors were surprised at her composure when she was brought in and during treatment.

“She was remarkably calm when she arrived,” Rotter said.

Korcsmaros had a tourniquet on when she arrived. She was stabilized in the trauma room and then taken into surgery for several hours. 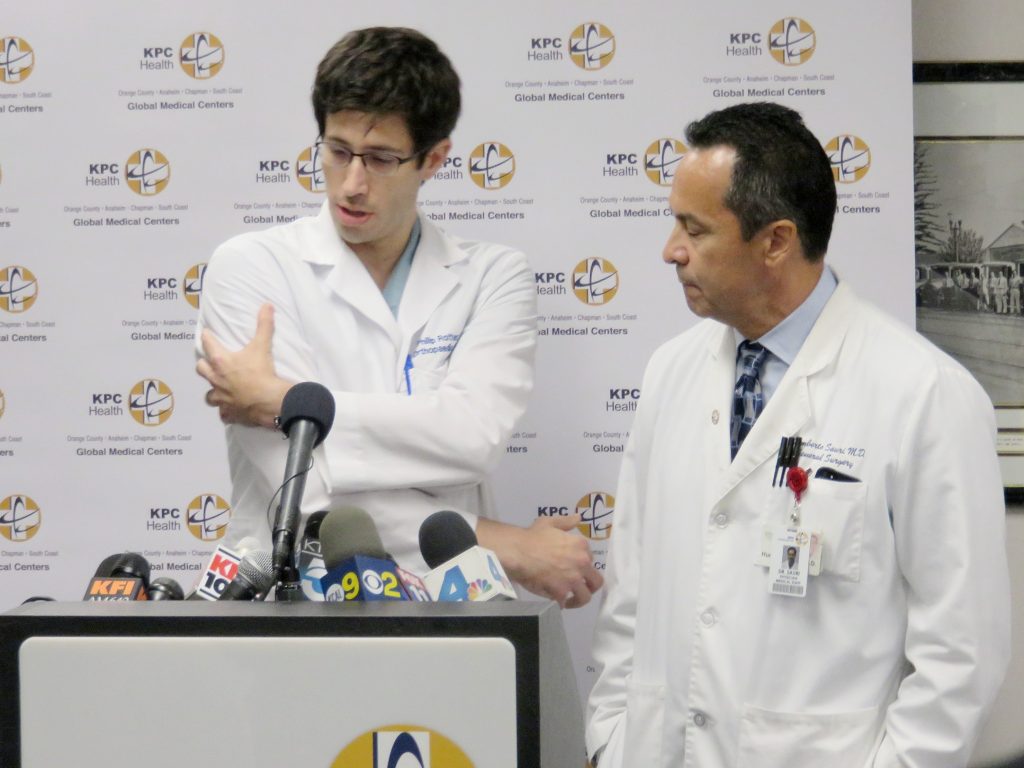 They looked very carefully for teeth in the wound, but found none left behind, Rotter explained.

Amazingly, her nerves are all functioning, Rotter explained.

“I was pretty surprised to see that, especially given where the wound is,” he said.

It’s too early to determine whether or not she will recover full use of her arm and there is still risk of infection and more treatment may be needed.

Her physical fitness was a “critical element” to her ability to survive the terrifying experience, Corliss noted.

“She seems like a very strong lady,” Sauri said.

Friends and relatives reached out to Korcsmaros on social media, expressing shock and sadness, praising how strong and tough she is, and wishing her well with recovery.

Following the incident, the city immediately evacuated the ocean from Corona del Mar State Beach to the Newport Pier area. A police helicopter searched the water to try and determine what type of animal bit the woman. They continued to search throughout the week, but did not spot a shark or any significant marine life activity.

They slowly reopened the ocean access in the days following the incident, with it fully restored by Wednesday afternoon.

Normal patrols are continuing, which include lifeguards monitoring conditions from the sand and water and the Huntington Beach Police Department’s helicopter flying over the city’s land and beach areas.

It was the right protocol to close access to the water, Lowe commented. Although chances of being bit are extremely low, it’s important to take precaution, he said.

“It’s important that people realize that sharks are out there pretty much all the time and we need to be cognizant of that and of their nature,” Lowe said.

Safety is not guaranteed in the ocean, he said, but considering how many people enter the ocean in Southern California every year compared to how many shark bites are reported, the risk is very low.

He suggested to stay in groups and try not to go out in early morning or late afternoon.

There have been studies tracking the movements and migration of sharks, and adult great whites will occasionally pass through Southern California, but it’s very rare to see them close to the shore. When they are sighted, its usually closer to Catalina or the Channel Islands.

If they learn more about their habits and movements, they can more accurately determine when and where they might show up and then better advise the public. They are developing new technology to study the sharks, but it’s expensive and there is not a lot of funding for shark research.

The white shark population has been rebounding the last 20 or so years, Lowe said. They’re an important part of the ecosystem, he noted.

“We have to realize that we have to share the ocean with them,“ Lowe said. “We’re a guest in their home.”