It’s been called “one of the most remarkable shows in musical theater history” by the Washington Post, and it won six Tony Awards including Best Musical.

Now, the Broadway musical phenomenon known as “Dear Evan Hansen” has made its way to Segerstrom Center through January 13 in a touring production worthy of its accolades.

Also worthy of its accolades is Pizzeria Ortica, where my friend Pam and I dined prior to seeing “Dear Evan Hansen.”

It’s not easy to get into Pizzeria Ortica on show nights, as it is usually packed and reservations are tough to get, unless you plan ahead. We nabbed a 5:15 reservation on Wednesday night, the only time available prior to the 7:30 p.m. curtain.

This was our second time dining at Ortica in as many weeks (we ate here prior to “The Nutcracker” back in December), but the menu is versatile enough for repeat dining, plus the restaurant is steps away from Segerstrom Center, making it a convenient location.

We started our meal with brussels sprouts cooked in brown butter with hazelnuts—or so we thought. Our entrees arrived first, and it turned out the brussels sprouts order never got placed, but in hindsight that was fine because the entrees were substantial, and we had room for dessert.

Pam ordered meatballs ($13) made with Mary’s free range chicken, pork, marinara and garlic crostini, plus a salad. Last time I had the squid ink fusilli ($16) with shrimp ragu, but this time I had a crazing for pizza and ordered the funghi pizza ($16) with wild roasted mushroom, fontina, mozzarella, and Calabrian chilis. I added anchovies for an extra $2.

The pizza had a nice charred crust, and the anchovies added another layer of flavor to the mushrooms. We shared the meatballs, which were not as dense as traditional meat-based meatballs.

For dessert, we could not decide between the budino ($11) – chocolate crème layered with caramel crème, salted caramel sauce, and whipped cream – and the maple pecan bar ($10) with salted caramel sauce, caramel gelato, and spiced rum apples, so we ordered one of each. We polished them both off with ease.

We strolled over to Segerstrom Center and took our seats with enough time to peruse the program. A pre-show of sorts was already taking place on stage. Scrolling images of social media sites (Facebook, Instagram, etc.) were projected onto panels above and to the side of the stage, foreshadowing the themes to come in “Dear Evan Hansen.” 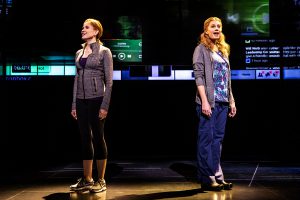 The show itself set records at the Music Box Theatre, where it opened in December of 2016. Based on the reception from the Segerstrom Center audience, this may be the most popular show since “Hamilton.” In fact, like “Hamilton,” Segerstrom is selling special $25 tickets via a daily lottery.

It’s easy to see the appeal of “Dear Evan Hansen,” especially for teen audience members and their families.

Evan Hansen is a high school senior with social anxiety that inhibits his ability to connect with other people and make friends. His therapist has him write a positive daily letter to himself starting with the words “Dear Evan Hansen.” One of his letters winds up in the pocket of a fellow student who has committed suicide. That student’s parents think that he and Evan were friends and want to know more about their son. Evan begins fabricating a relationship to become closer to the boy’s family, but the lies spin out of control via social media, and now Evan deals with his newfound popularity while the fake friendship scenario escalates to the breaking point.

The plot is complicated but comprehensible, and the script, and actors, capture teen angst amid the incessant intrusion of social media that has become a part of their lives. The show also illuminates the role parents play within this situation. One parent with teens said she cried throughout the show, which shows the emotional impact wrought by the playwrights. 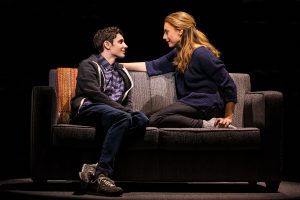 The songs, by Benj Pasek and Justin Paul (the team behind the music for “La La Land” and “The Greatest Showman”), advance the plot while capturing and illuminating emotions. They are delivered by a superb young cast, many of whom made their Broadway debut in “Dear Evan Hansen.”

Audience response was strong throughout the show, and ended with a heartfelt standing ovation. As timely a show as you’re likely to find, “Dear Evan Hansen” has struck a nerve that is seldom exposed on a musical stage. The “Evan Hansen” phenomenon is likely to continue for a long time to come.