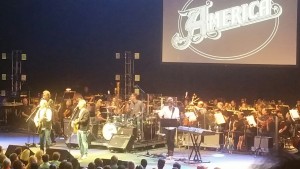 A feeling of nostalgia was in the air when Gerry Beckley and Dewey Bunnell took the stage last Thursday night at the Pacific Amphitheater in Costa Mesa, celebrating the 45th anniversary of their band, America. The duo graduated high school together in 1969 and have been making music ever since.

The nearly sold-out crowd enjoyed perennial hits like “Ventura Highway,” “Tin Man,” “Don’t Cross the River,” and “Lonely People,” which flooded AM stations in the 1970s and provided the soundtrack to many of the attendees’ own high school years.

“I grew up listening to America, and even saw them open for The Beach Boys at a concert in Anaheim Stadium back in the late n70s,” noted fellow Indy writer Christopher Trela, who also attended the concert. “Back then, anyone who had a radio knew their music and could sing along to the songs.”

Beckley and Bunnell were spry and relaxed on stage, wielding acoustic guitars with Beckley occasionally moving to keyboards. Backed by a bass player, who provided original member Dan Peek’s high harmonies, and a drummer and lead guitar player who definitely weren’t born when America’s classics were first on the radio, the group had a great sound.

On this particular night, the duo were also backed by a very dressed down Pacific Symphony orchestra, which was 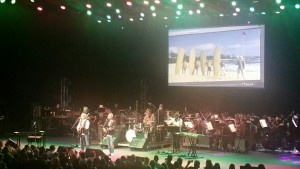 conducted by an enthusiastic Stuart Chafetz. The symphony added extra power to deeper cuts like “Old Man Took,” and “The Last Unicorn,” which Bunnell explained were dusted off specifically for the occasion. A cover of the Mamas & the Papas’ “California Dreamin’ was a nice ode to the So-Cal crowd.

Throughout the evening, the duo reminisced about growing up in the swingin’ London of the 1960s (both military brats, they grew up on US bases in England), making the obligatory jokes about getting older and not understanding Facebook.

Fittingly, it was the earlier material they performed that had the most energy. “Riverside,” off of their 1971 debut was a highlight, with some killer picking from Beckley, while the Vietnam War anthem “Sandman” was the showstopper of the night. The swirling violins of the orchestra brought the song to new heights, while the band jammed away, as iconic images from the turbulent 60s played on the monitor behind them. The otherwise mellow audience rose to their feet for the towering crescendo of the song, and were whipped into a further frenzy when the band went immediately into the transcendent “Sister Golden Hair” to close out the show. True, Beckley’s nasally voice hasn’t held up as well as Bunnell’s, but there is still plenty of thrill and charm in hearing the man himself singing the standard.

Bunnell took the encore, playing the obvious choice, “A Horse With No Name,” appropriately ending the night.

Upcoming shows in the OC Fair Concert Series include Steve Miller Band on July 24, Spandau Ballet on July 29, Three Dog Night and Jefferson Starship on July 31, Fab Four and Wings Band on August 1, and Huey Lewis & the News on August 2.