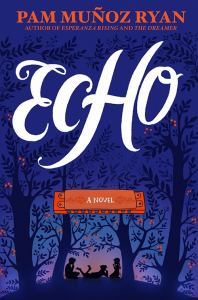 People are always asking what the kids and I are reading. I enjoy the fact that I have somewhat of a platform to share good literature, and love that they find my opinion to be one worth asking for.

The truth is, however, that most of the time, choosing a book that my boys will love as much as I want them to, is just as challenging for me as it is for everyone asking.

Nevertheless, summer reading at our house has seen a variety of good books pass through our collective hands. Combined, we have enjoyed “Pay it Forward,” by Catherine Ryan Hyde, “Escape From Mr. Limoncello’s Library,” by Chris Grabenstein, “I’ll Give You the Sun,” by Jandy Nelson, and “The Nazi Hunters: How a Team of Spies and Survivors Captured the World’s Most Notorious Nazi,” by Neil Bascomb, just to name a few.

Now, in this latest children’s book spotlight, I’d like to turn the attention to one of our “on deck” books, “Echo,” and its amazing author, Pam Muñoz Ryan.

Ryan is an acclaimed children’s author who has garnered numerous awards for her work, including, among others, the National Education Association’s Civil and Human Rights Award, two Pura Belpré Medals for excellence in portraying the Latino cultural experience, and the Willa Cather award, honoring contemporary and historical books that capture the diversity and broad roles of women in the American West

society expects of them, Ryan has given us such classics as “Amelia and Eleanor Go for a Ride,” “Riding Freedom,” and “Esperanza Rising.”

“Amelia and Eleanor Go for a Ride” is a lovely picture book that tells of the time that Amelia Earheart spirited Eleanor Roosevelt away from a state dinner to take a night flight over Washington, D.C. How I would have loved to have been a fly on the wall for that trip!

“Riding Freedom” tells the incredible true story of Charley Parkhurst, a stagecoach driver and California rancher. Born in 1812 in New England, as Charlotte, Parkhurst was raised mostly in an orphanage for boys. This suited her just fine, as she had no use for dolls and frills, and preferred to spend her time working in the stables.

As she grew older, she discovered that society in the mid-1800s had a much different idea of how her life should play out than she did. So, she eschewed her life as Charlotte, adopted the moniker Charley, and lived out her life as a man, free to do as he chose. Eventually, Charley settled in California during the Gold Rush, and became, perhaps, the first female in the Golden State to cast her vote in a presidential election, albeit while passing as a man.

“Esperanza Rising” was my first introduction to Ryan, and tells the story of Esperanza, a young girl of privilege growing up on El Rancho de las Rosas in Aguascalientes, Mexico. As their circumstances change, Esperanza and her mother must flee to America, where they become a part of the immigrant working class in California – a drastic change of station for young Esperanza.

Based on her own grandmother’s journey from wealth in Mexico to life in a migrant worker camp, “Esperanza Rising” earned Ryan one of her two Belpré medals.

Her latest book, “Echo,” is a mystical piece of historical fiction that follows three children from divergent backgrounds as they grow up during some of the most challenging times of the 20th century: the Great Depression, the rise of the Nazi regime, and WWII. Throughout, each of their stories is woven the magic of music, and of a particular harmonica.

Word on the street is that “Echo” will be a contender for this year’s Newbery Medal, and I have no doubt that Ryan will again provide a story both fantastic and inspiring.