California is beset with wildfires, Florida and Puerto Rico are still reeling from hurricanes and Mexico is recovering from a devastating earthquake. No surprise that disaster is a hot topic of conversation.

The city has legally-binding documents that dictate what is to be done in the event of any number of terrifying circumstances, Brisbois told about 50 residents during a Speak Up Newport meeting Wednesday.

Newport also has a 32-seat Emergency Operations Center and hundreds of trained employees and volunteers who are ready to help.

The concern is for the individual families, each with their own needs, he said.

“Everyone needs a personal preparedness plan,” Brisbois explained. “We need you all to join us in partners in preparedness.”

Building a personalized disaster kit is the number one thing that each family should have already or put together, he said. The kit should include a variety things, all of which can be thrown in an old suitcase or trunk.

Fill it with copies of family members’ identification, a change of clothes and shoes, a first aid kit, medicine, some nonperishable food, water, toiletries, matches, a radio, and a flashlight.

When the police or fire department request residents evacuate the area, people should be ready to go, Brisbois noted.

“We really need you to be prepared. If we’re asking you to evacuate, it’s for your own good. And we need access to get in and fight the fires effectively,” he said.

In addition to building a disaster kit, he said photo documentation of your home and valuables are important.

“Go home, and take a photo of your house,” he instructed audience members.

If someone’s home is destroyed, insurance companies will ask for photos and proof of what the house looked like prior to the fire.

He pointed out that when Anaheim Hills residents were asked what they wished they would have done before the fire, they replied that they wished they gone through and taken photos of what each room looked like. As of Wednesday, 23 structures were destroyed in the Canyon Fire 2 and 36 were damaged.

Fires and earthquakes are always a threat in California, but Brisbois said a long-term power outage is one of the most dangerous situations the region could face.

“We are all at the mercy of Southern California Edison,” Brisbois said.

When the power goes out, there is nothing the city can do to get the power back on. Each family must be prepared on its own.

He outlined two “worst case scenarios” that the city could face. 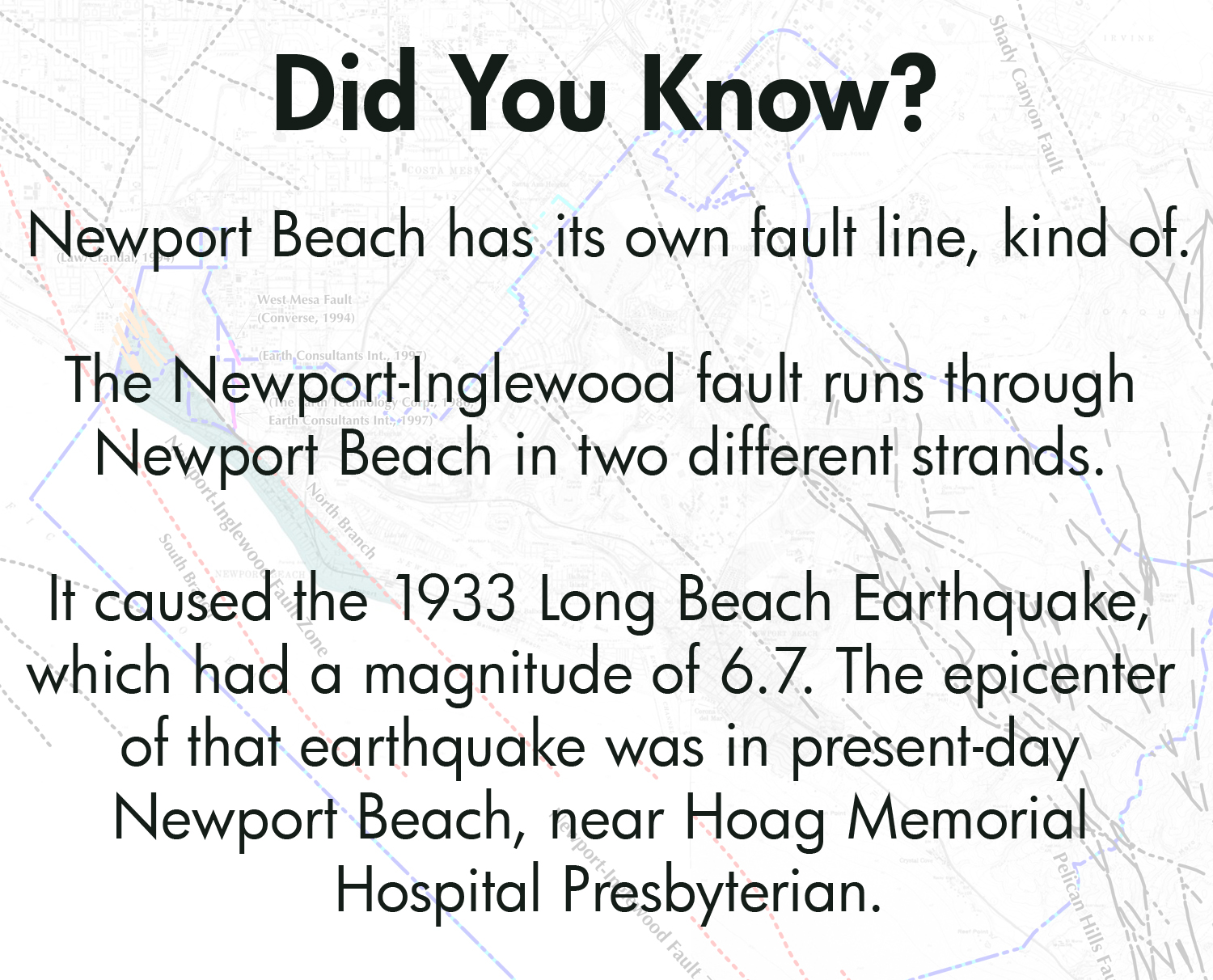 His first example is an earthquake along the Newport-Inglewood fault line during the Santa Ana Winds. This is notably dangerous because the earthquake could cut off the water supply and the powerful winds could stoke a fire the could not be put out.

The next scenario would be an earthquake that occurs off-shore and causes a tsunami during high tide, which would cause large-scale flooding.

The city has practiced and prepared for these two events numerous times over the years.

Most of the city would not be impacted by a tsunami, but those in one of Newport’s eight island communities or the Balboa Peninsula would need to get to 150 feet above sea level, which Brisbois said was around the Hoag Memorial Hospital Presbyterian area.

A previous City Council approved and installed three tsunami alarms, located at The Wedge, 15th Street, and 61st Street. When the alarms are heard, residents should proceed to higher ground immediately.

Brisbois and the over 500 active Community Emergency Response Team volunteers have taken the message of preparedness to over 190 homeowner’s associations, 2,800 businesses, 22 public schools, and five private schools.

Newport Beach’s CERT program has been in place for 18 years, he said. Community preparedness has successfully spread in the area thanks in part to Balboa Island residents, including former president of the Balboa Island Improvement Association and current City Councilman Jeff Herdman, who also attended Wednesday’s Speak Up event. 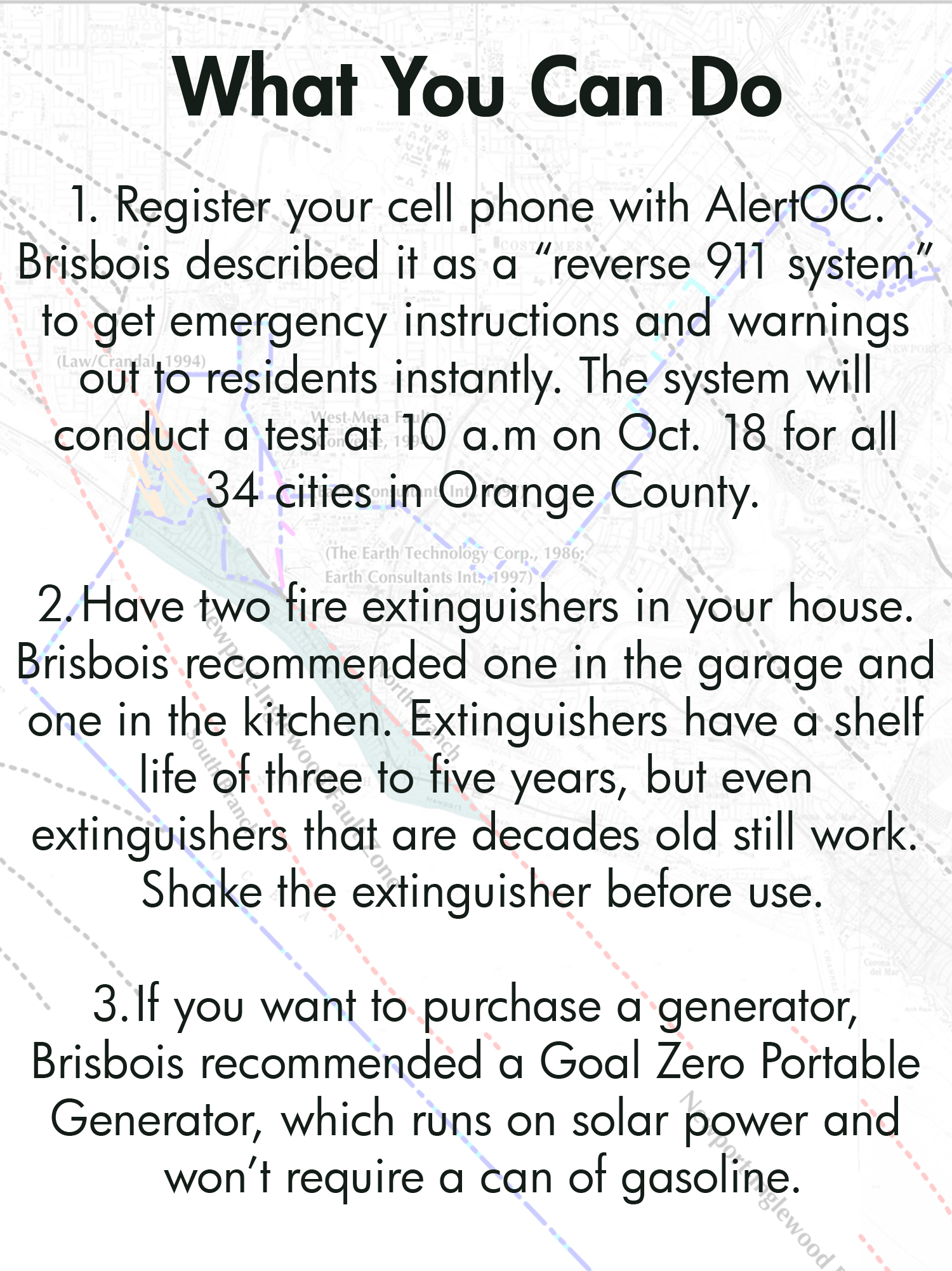 He said that longtime residents are to thank for keeping new residents and visitors in-the-know about disasters.

“The residents we serve here in Newport Beach are civically-engaged, they’re active in the community, and they understand what we’re doing,” he said.

He encouraged everyone to learn CPR and basic first aid skills. CERT training is conducted by the fire department four times a year. The program works for people of all backgrounds and ages. The oldest volunteer is 98 and the youngest is 12.

“As long as your mouth works, you can tell people what to do following a disaster,” he said.

“Neighbors helping neighbors,” Brisbois said, is the key to getting through a disaster.

He asked the audience to prepare their own home, then go door-to-door to check on their neighbors. When emergency personnel arrives, be the person on the street who can direct others to the house that needs assistance or has critical inquiries.

Brisbois concluded with an important question: If you find yourself dwelling over the next horrible disaster, consider this: The city of Newport Beach is ready. Are you?