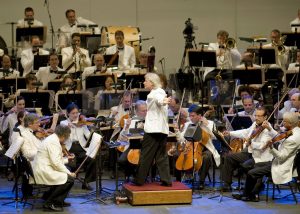 For many years the Pacific Symphony has ended its outdoor summer concert season with a night of spectacular music by Tchaikovsky. This year was no different, but the venue was.

Since the Irvine Meadows/Verizon Wireless Amphitheater closed last year, the Symphony has been staging their outdoor concerts at the Pacific Amphitheater adjacent to the Orange County Fairgrounds in Costa Mesa.

Thought it may lack the ambiance of picnicking on rolling grassy lawns, the venue has proved more than capable, with plenty of picnic tables and the option of finding a grassy spot to spread a blanket.

This year the Pacific Symphony’s SummerFest provided something for everyone, from Symphonic Springsteen (an homage to “The Boss”) on July 4; to the B-52s for the new-wavers to Jurassic Park for kids of all ages.

For the Tchaikovsky Spectacular concert, Maestro Carl St. Clair conducted the orchestra for performances of the “Romeo and Juliet” overture by Tchaikovsky, “Galop” from the operetta “Moscow, Cheryomushki” by Shostakovich, and Piano Concerto No. 2 by Rachmaninoff, performed by the Gold Medalist of the 2017 Van Cliburn International Piano Competition, Yekwon Sunwoo, who kept the audience spellbound during his performance.

With the classic finale of Tchaikovsky’s 1812 Overture emanating from the stage, the audience was enthralled by the fireworks going off over the stage and the cannon barrage at the top of the earthen wall at the rear of the venue.

Though the Plaza Pacifica picnic area lacks some of the ambiance of Irvine Meadows, good news is around the corner. The (temporary) 12,000-seat FivePoint Amphitheater in Irvine that borders the Great Park is about to open. The Pacific Symphony is expected to perform there next summer while a more permanent facility is built within the Park.

Meanwhile, the Pacific Symphony has gone back indoors at the Segerstrom Concert Hall for its Classics and Pops seasons. For tickets, visit PacificSymphony.org. 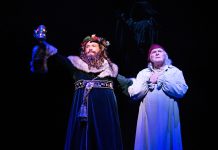