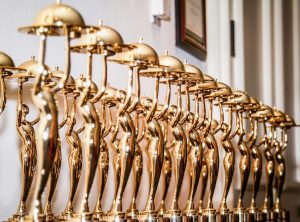 And the Golden Foodie Award goes to…

It was an evening to honor and celebrate the best of Orange County restaurants, chefs and mixologists, and the Golden Foodie Awards did not disappoint—18 statuettes were handed out Sunday night in a variety of categories from Best New Restaurant to Best Wine List to Chef of the Year.

Guests were ushered into the ballroom at 6:30 p.m. and made their way to elegantly-decorated tables filled champagne by Nicolas Feuillatte, moscato grapes and mixed nuts by Melissa’s Produce, bread and cheese by Sadie Rose Baking Co., hand painted sugar and chocolate cookies with “Words of Wisdom” by Ashley Guzman-Rose, red velvet cakes by Julie Thomas from Sweet Surrender Specialty Desserts & Pastries, B. Toffee from Betsy Thagard, and chocolate saucisson from Elyssa Fournier from Mixed Bakery.

Best Lunch Spot in Orange County was won by Sgt. Pepperoni’s Pizza, a restaurant we’ve championed since the day they opened. Co-owner Stan Frazier is a longtime Newport Beach resident and former drummer for Sugar Ray who reopened Sgt. Pepperoni’s four years ago, while chef Trevor Kotchek hails from New York and has created a fun and tasty menu.

“I just make pizza,” Kotchek told the audience. “It’s good pizza. You should come and get some.”

The Winery Restaurant & Wine Bar was a repeat winner for Best Wine Program, and we have to agree. Sommelier and managing partner William Lewis knows his wines, and stocks a wide variety of varietals from familiar to cult to hidden gems. He can match wine to any cuisine.

“This does not get old,” Lewis told the crowd upon accepting the award. “People come in and ask for fun things, they bring fun wines for us to taste—we are very blessed.”

Corona del Mar resident Elyssa Fournier was named Pastry Chef of the Year, and for good reason—her Mixed Bakery is making some truly delicious desserts. Christopher sampled her meringue cookies at the Pacific Food & Wine Classic several weeks ago and was so impressed he kept returning for more samples.

The Chef or the Year category was a tough one: Chef Rich Mead of Farmhouse, Chef Ross Pangilinan of Mix Mix Kitchen Bar, and Chef Michael Rossi of The Ranch Restaurant. The winner was Chef Mead, a local culinary legend for such restaurants as Sage and Sage on the Coast. He opened Farmhouse last fall and has been busy from day one. His “field to fork” concept extends to virtually every dish on his creative menus.

Other notable awards: Mix Mix won for Best New Restaurant, which got our vote. We’ve been fans of Chef Ross Pangilinan for the past five years starting with his stint at Leatherby’s Café Rouge at Segerstrom Center. We followed him to Mix Mix, which he opened last fall, and have been thrilled with his global cuisine that combines traditional Filipino dishes with a modern California twist.

Outstanding Community Service award went to Bruno Serrato of Anaheim White House, which suffered a fire earlier this year and has been closed while Serrato rebuilds his classic Italian eatery. Serrato cooks pasta for thousands of underprivileged kids every night, and despite the fire found other kitchens to use so he could continue to feed his kids. Serrato has received numerous accolades for his efforts, and has been expanding his program so it can be adapted in other cities.

Best Service Award went to Selanne Steak Tavern in Laguna Beach, while the final award of the night, the newly-created Lifetime Achievement Award, went to legendary Chef Alan Greeley, who after nearly four decades in business recently closed his fabled Golden Truffle restaurant so he could retire to Florida.

Once the awards ceremony ended, guests made their way into the Garden of Eden Lounge After Party, where they enjoyed music by DJ Miss Ninja, cocktails by Patron, a Maker’s Mark Lounge, an outdoor Secret Garden lounge with Grilled Cocktails by DCS and Ketel One Vodka, and other delights.

“Each year this event gets better and better, we are so honored to celebrate our talented and hard-working restaurant community,” said Pamela Waitt, creator and producer of the Golden Foodie Awards and President of the OC Restaurant Association Inc.

Sidebar: Nominees & Winners of the 2017 Golden Foodies (* denotes the winner):

2017  Restaurateur of the Year