I took Wyatt to a birthday party last weekend at a pet store with reptiles, snakes of all varieties including anacondas, bullfrogs, and more.

The kids get to see, feel, and learn about a variety of animals that no mother in her right mind would ever allow in her home as a pet.

Then in adjacent room, with the odor of reptilian cages wafting through, the kids enjoyed pizza and cake. Really, for boys in second grade, it’s all it’s cracked up to be and more. I should know, I had our oldest son’s 8th birthday there several years ago.

When I went to pick up Wyatt, I was standing with another mom. Her son ran up and started telling her about what they saw and touched during the party.

“…and a tarantula, and a scorpion!” to which I, standing right there, replied, “Ewwww, gross” and the mom politely, with a wide smile explained to me, “Well these kids may have different associations with these animals than we did” 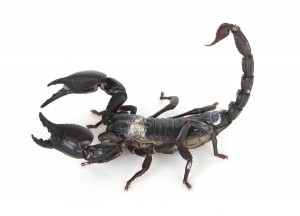 Although she had a smile on her face when she said it, I knew she was annoyed that in front of her child I was behaving immaturely, raining on her future wildlife biologists’ budding career. Showing bigotry towards the less fortunate of the animal kingdom. Setting a bad example. Behind the smile and the gentle words, she was really saying, “Must you be so immature and taint our children’s view of scorpions and tarantulas?”

On paper I get it. All God’s creatures, every living thing plays an important role in the delicate balance of the natural world. We can all marvel at how scorpions have been alive for millions of years, surviving and defending themselves in a harsh environment in the wild. However, call me gifted, but even as a child, I knew they were ugly and scary and dangerous.

We’re not talking a bunny rabbit. We’re talking an animal with eight feet, eight eyes, and a long jointed tail which doubles as a weapon filled with poison that can be fatal to humans. I think it’s OK to say eewww, gross.

Why did it bother me that I was being chastised for verbalizing my opinion? Maybe it was the “I’m a more sensitive, and aware parent than you” attitude. And, that may be true. Maybe it bothered me because I felt it was all tied in with the political correctness climate in which our kids are being raised. So many rules about what we can say, and how we should say it.

I think it’s OK that kids know exactly where I stand on things, both large and small.  Rebelliousness is what this country was founded on. I am not afraid to have an opinion, even if it goes against the grain. I am comfortable going on record: I feed my kids gluten and let them watch PG-13 movies when they are twelve. And, I am not afraid to let the world know, indeed, I hate scorpions.

Jill Fales is the mother of four and author of “My Laundry Museum & Other Messy Gifts of Motherhood.” Visit her at www.JillFales.com