Ok why do I refer to it as the Taj-ma-city-hall?

The Taj Mahal, in India, is a mausoleum built in the 1600s by Shah Jahan for his 3rd wife Mumaz Mahal who died in childbirth. It is considered the ultimate example of opulence of that time period and has since become synonymous with opulence in architecture. And the City “Hall” versus “Mahal” are a great homonym. Thus “Taj Ma-City Hall”. 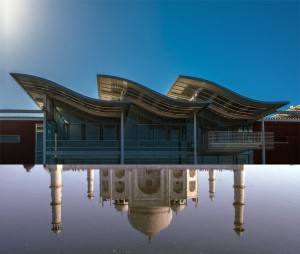 And this city hall is opulent by city hall standards. By the city’s own standards, the original $40 million project is now nearly $140 Million.

As I have indicated in the past, the city is trying to convince us that their over-expenditure was justified because the scope grew. “Which part of the project should we have left out?” our mayor declared in his state of the city speech.

Let’s see, where should I start? According to the city’s website:

The project started with the idea of remodeling the aging structure that city hall was located in on the peninsula. Nice thought, but not practical and with the new incorporation of the Newport Coast, not very centralized.

The Direction We Gave

We moved city hall per Measure B in a plan known as the “Ficker Plan” approved by the voters in February 2008.

This called for NOT having an “image building,” just a 68,000 SF building and 220 car parking garage, all built below the view line.

This list is long so I am going to attempt to break it up a little. There are four main elements.

City Hall: A 98,000 SF building. It grew, a lot, in fact almost double of the existing city hall, but hey there are many more employees now, with those huge pensions that we have to put somewhere. It is also an “image building,” with a “wave” roof and a “sail” on the Council Chambers. We also got new city council chambers, community rooms, and an “emergency readiness center.” The council seems to want to make a statement with their names on it. It is NICE, it is EXPENSIVE it is BIG.

Parking Structure: A 450 car parking structure, this doubled in size. And instead of using some surface parking they put all the spaces in the structure, where they cost probably 10 times what surface parking costs. But, the cars are all hidden from views from above (mostly); and they saved the land for parks and belvederes (no, not the car made by Chrysler in the 60s).

Civic Center Park: A 16 acre park including a dog park, a wetlands (we used to call these swamps), a giant bridge, and a “belvedere” (I had to look that one up–it is an architectural term indicating a structure designed to take advantage of a view) I presume that a “structure” can include a 10 tall white bunny rabbit in the sculpture garden. ALSO we got a “bridge to nowhere” to connect the lower park to the upper park without using the traffic signals to cross. The bridge alone was over $2 million and looks like a diving platform at the south end.

Library Expansion: The original plan did not call for any library expansion. There was only a modest budget to orientate an entrance towards the additional parking for the library and the city hall. The council took 17,000 SF to do this entrance RIGHT. AND this is NICE.

We Are Stuck With the “TAJ” Now

So the new Civic Center was $100 Million over the original “remodel” budget and one year late from the revised-revised-schedule. With debt service, the costs will grow almost another $100 million to $225 Million total. And the council wonders why the new civic center is referred to as the Taj Ma-City-Hall, or the “Taj” for short?

The Ficker Plan also called for the sale of the existing City Hall site to offset the costs for the new civic center, which the council has decided not to do. Instead, the city fathers are planning on developing a hotel on the site.

AND the city council wonders why nobody considers them conservative.