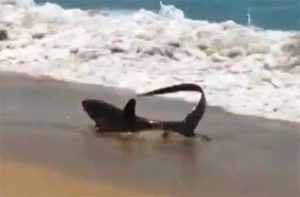 On Friday, Aug. 14, Newport Beach Lifeguards observed a small thresher shark that washed ashore near the Balboa Pier. Lifeguards closed the water in the area to swimmers and monitored the shark’s activity.

The shark made no effort to swim back to deeper water and continued to display behavior consistent with injury or illness.

Newport Beach Animal Control was called to assist. An Animal Control officer concurred the behavior of the shark, along with visible injuries, indicated that it was in grave condition and would not survive if returned to the water. The decision was made to remove the shark from the water and euthanize it.

The shark was then transferred to the California Department of Fish and Wildlife, Fisheries Branch and examined by a Senior Fish Pathologist. The pathologist determined that the shark had suffered a massive intracranial hemorrhage along with numerous abrasions and lacerations on the eyes, head, flanks, and fins.

The nature of the injuries strongly suggests that the animal was recently caught in a commercial fishing net. Thresher sharks can sustain severe lesions from fishing nets, and when hauled onto a boat deck in the net.

When injured ocean wildlife is found on Newport’s beaches, City staff will either leave the animal undisturbed until it returns to the ocean, or assist the animal while maintaining public safety.

This thresher shark was humanely euthanized to reduce suffering, based on severe injuries for which there was no potential for recovery.