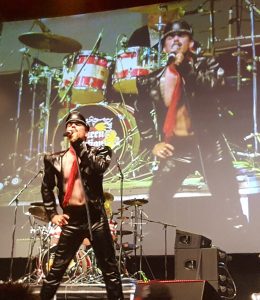 It may have started with The Beatles, but the tribute band trend has turned into a musical craze that draws thousands of people to concerts starring faux figures from famous bands.

At the OC Fair, tribute bands are indeed all the rage. The Fair’s Hanger facility has programmed tribute bands nearly every night of the fair, ranging from tributes to bands who are no longer around (Queen, Led Zeppelin, David Bowie, ABBA, etc) to current performers who tour infrequently (Elton John, Billy Joel, U2, Fleetwood Mac).

Having seen Queen at the Forum during their heyday in the late 1970s, plus countless clips of them performing live, Christopher knows both the music and mannerisms of the Queen musicians. He’s seen Queen Nation several times in the past, but the Fair concert took the Queen tribute to another level.

Not only was the show packed with Queen fans, but the band looks and sounds eerily like Queen, especially Gregory 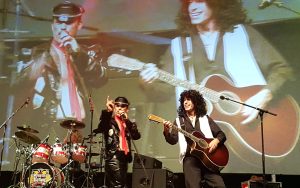 Finsley as the late Queen lead singer Freddie Mercury. For two hours, Queen Nation created an authentic Queen Live experience, which included all the hits (“Bohemian Rhapsody,” We Are the Champions,” “Somebody to Love” and more) and a few deep cuts from their albums.

The crowd reacted to the show as though it was Queen reincarnated, and the band rewarded the audience with a visually-exciting and musically-authentic experience. 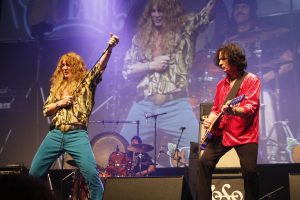 Last Saturday night, nearly 1,500 Zeppelin heads were able to get the Led out with Zeppelin Live, four guys from California who have been doing their best faux-ZoSo since 1999.

The enthusiastic crowd, as well as onlookers watching the jumbotron outside, were treated to a two-hour set of perennial favorites (“Black Dog,” “Whole Lotta Love,” “Ramble On,” and the obvious show-closer “Stairway to Heaven”) as well as some deeper cuts like “In The Light” and “The Rover” off of “Physical Graffiti.”

Loud, forceful, and faithful to the source material, the music was mostly excellent (minus a timing issue during 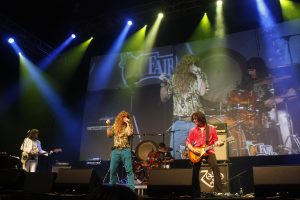 “Dancing Days” that was quickly righted). Typically, it’s the performative aspects (or the actual imitating) that sets tribute bands apart from one another. On this point, Zeppelin Live are slightly above average.

Jefrey Larson, who hits the stage as Robert Plant, gets away with his slipshod wig and white Adidas by having a decimating voice that absolutely rivals Plant in his prime. He has Plant’s hair-fluffing, and hands-on-hips power posing down.

Stuart Horton as Jimmy Page absolutely shreds, even bringing out the bow for “Dazed and Confused,” but his actual resemblance to Page in looks or mannerisms is pretty nonexistent. The winners of the look-a-like contest are definitely Joel Pelletier as John Paul Jones and Jimmy Wells as John Bonham. Oh, and nobody’s pants were anywhere near tight enough. 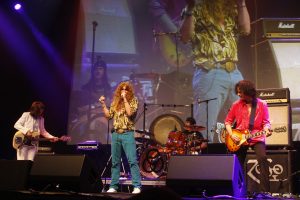